The prototype 190SL on test in Europe. Note the cut down door, hood scoop, lack of rear wheel arch eyebrows and a nose design inspired by the 1953 300SL ‘Hobel’.

The 190SL
Bringing 300SL panache to the masses.

In time for the summer of 1955, production of the four-cylinder-engined 190 SL sports car was begun at the Sindelfingen plant. Designed as a sporty, elegant two-seater for touring, the car, internally designated W 121, rapidly acquired great popularity, also and especially among the ladies. Initially, only a roadster with soft-top was available (price in 1955: DM 16,500). It was joined in the fall by a coupe with removable hardtop, available with or without a soft-top (prices in September 1955: DM 17,650 / DM 17,100).

By the time production was discontinued in February 1963, 25,881 units had been built, and most of these had been shipped to the USA. The 190 SL initiated the post-war tradition of small roadsters from Mercedes-Benz – a tradition which is continued most successfully today by the second-generation SLK roadster.

At the International Motor Sports Show in New York (February 6 – 14, 1954), the new 300 SL super sports car (W 198) was the star on the Mercedes-Benz stand. But it did not overshadow the 190 SL roadster, presented at the same time and often referred to as the Gullwing’s little brother. The 190 SL equally enjoyed a highly positive response, prompting the decision in favor of large-scale production. The 190 SL and the 300 SL were designed on the initiative of the American Mercedes importer Maximilian E. Hoffman who made out excellent sales prospects for the two models in the US market, and he was proved right: both series sold very well indeed.

The 190 SL was developed on the basis of the three-box bodied Mercedes from the W 120 series and designed as a roadster right from the start. Unlike the Gullwing, it was not meant to be a thoroughbred sports car but a sporty, elegant two-seater for touring and everyday use.

Inspiration from the 300SL

The bodywork of the 190 SL was designed by Karl Wilfert and Walter Hacker who modeled it closely on that of the 300 SL. The car displayed in New York in February 1954 was a prototype, neither matured in its styling nor fully tested in terms of its engineering. The 190 SL was carefully revised in both respects, and the final version was presented by Mercedes-Benz at the Geneva Motor Show in March 1955. It differed significantly from the prototype: the stylized air intake on the engine hood had been omitted, the front edge of the engine hood had been relocated toward the rear, eyebrows now also featured on the rear wheel cut-outs, and the bumpers, indicators and rear-light units had been modified. The pre-production series was built at the Sindelfingen plant from January 1955, and production of the main series began in May

The trade press praised the safe handling characteristics of the 190 SL. These were ensured, among other things, by the single-joint swing axle with a low pivot point adopted from the 220a. The front axle suspension complete with subframe had been adopted from the 180 with which the 190 SL also shared the floor unit, though in shortened form.
The 1.9 liter gasoline engine had been newly developed. The four-cylinder powerplant featured an overhead camshaft and is regarded as the archetype of an entire family of engines. In the 190 SL, it developed 105 hp (77 kW) at 5700/min and accelerated the roadster from standstill to 100 km/h in 14.5 seconds. The roadsterâ€™s top speed was 170 km/h â€“ a highly respectable speed on the roads of the 1950s and 60s. At 8.6 liters per 100 km/h, fuel consumption was fairly moderate, and the 65 liter tank provided the car with an adequate range. 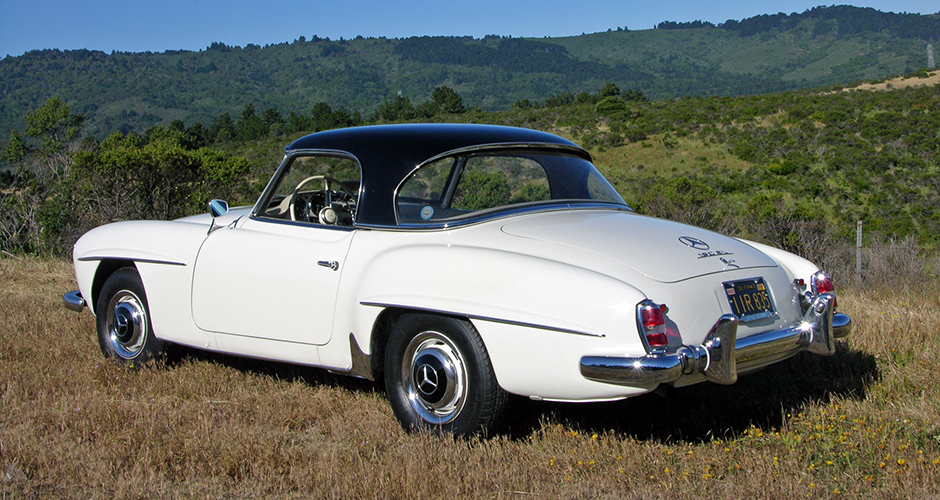 The sports version of the 190 SL scored its greatest successes in 1956, in the Grand Prix for sports cars in Macau, entered by the Daimler-Benz importer in Hong Kong. The right-hand-drive roadster won the race ahead of a Ferrari Mondial and several Jaguars and Austin-Healeys. In the same year, the Moroccan general distributor of Mercedes-Benz won the GT class (up to two liters displacement) in the Grand Prix of Casablanca. Due to racing regulations, however, the idea of a 190 SL for motor sport was not pursued any further: the car, modified as described above, would have been allocated to the cate-gory of production sports cars in many competitions and would there-fore have been without a chance. What’s more, a decision made by the FIA racing authority prevented the car from being allocated to the GT category, the decision requiring a Gran Turismo to be completely enclosed â€“ a condition the converted 190 SL was unable to fulfill.