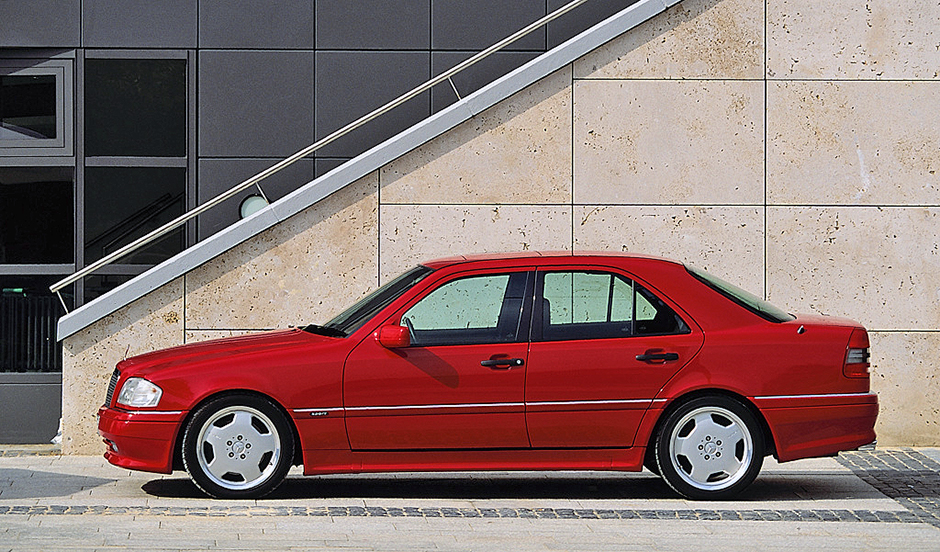 The Mercedes-Benz C 36 AMG was premiered at the International Motor Show in Frankfurt am Main (IAA) from 9 to 19 September 1993. The debut 25 years ago was the first highlight in a unique success story. For this high-performance saloon from model series 202 was the first joint project to be created by Mercedes-Benz together with the engineering company AMG founded in 1967. The Mercedes-AMG model range, a wholly-owned subsidiary of Daimler AG since 2005, is now more comprehensive than ever before.

Stuttgart. This power package for the C-Class is a clear statement on automotive sportiness spanning the entire product range: 25 years ago Mercedes-Benz unveiled the C 36 AMG as the top model of the new C-Class in model series 202 at the International Motor Show in Frankfurt am Main (IAA, 9 to 19 September 1993). By 1997, 5,221 units of the 206 kW (280 hp) high-performance saloon had been built in total. That is ten times more than the exclusive 190 E 2.5-16 Evolution II of model series 201 from 1990 with similar performance data. 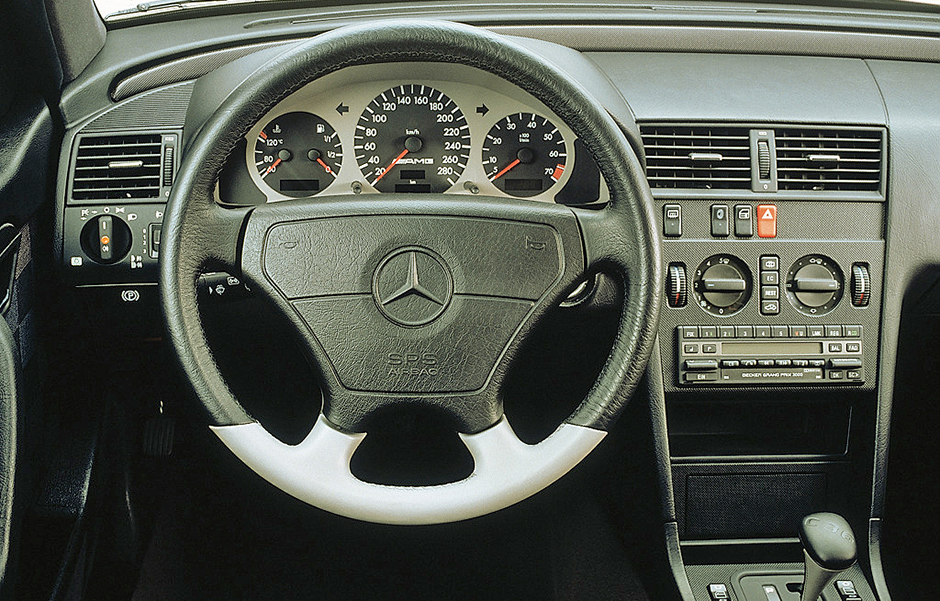 The C36 interior featured a number of embellishments to separate it from the standard C-class.

The Mercedes-Benz C 36 AMG delighted the experts and fans alike in 1993. This is also thanks to a history of passion for the Mercedes star dating back to the 1960s: in 1967 Hans Werner Aufrecht and Erhard Melcher founded their engineering firm for design and testing in the development of racing engines. In their free time, the two Mercedes-Benz employees had already built up racing cars on the basis of series-production cars with the star. The sporty optimisation of customer vehicles for the road now became a second career.

The letters AMG in the company name stand for Aufrecht, Melcher and for the place where Aufrecht lived, Großaspach. The two companies came ever closer via touring car racing, where Mercedes-Benz and AMG cooperate very successfully, in particular in the German Touring Car Championship (DTM). Then from 1990 they also cooperated on the development of sporty high-performance models for Mercedes-Benz series production. Twenty-five years ago the C 36 AMG was the first result of this fruitful collaboration. In that same year there followed the performance-enhanced variants of the E-Class Saloon (W 124) and the SL (R 129), which were offered with a 280 kW (381 hp) 6.0 l, V8 engine as the E 60 AMG and SL 60 AMG.

The basis for the C 36 AMG was formed by the Mercedes-Benz C 280, which was extensively revised in terms of engine and chassis. Instead of the C 280’s 2.8-litre variant of the six-cylinder in-line engine M 104, its 3.2-litre version was used, and was also to be found at this time in models such as the E 320 (model series 124). In order to increase the cylinder capacity to 3,606 cubic centimetres, the AMG engineers upped the bore from 89.9 to 91 millimetres and the stroke from 84 to 92.4 millimetres.

Many further refinements contributed to the successful overall concept of the C 36 AMG. On the engine these include the special custom-made pistons as well as the reconfiguration of the crankshaft’s torsional damper, lowering of the oil deflector by two millimetres, modification of the oil spray nozzles, a larger stroke and the modified valve timings of the intake camshafts, plus extended exhaust ports and an air intake pipe with a considerably larger cross-section between the air filter box and intake manifold. The engine management was also adapted to the changed parameters. All these modifications added up to an increase in the output of the 3.6-litre engine in the C 36 AMG compared with the 2.8-litre series engine by 64 kW (87 hp) to 206 kW (280 hp) at 5,750 rpm. The torque achieves 385 Nm at 4,000 to 4,750 rpm. 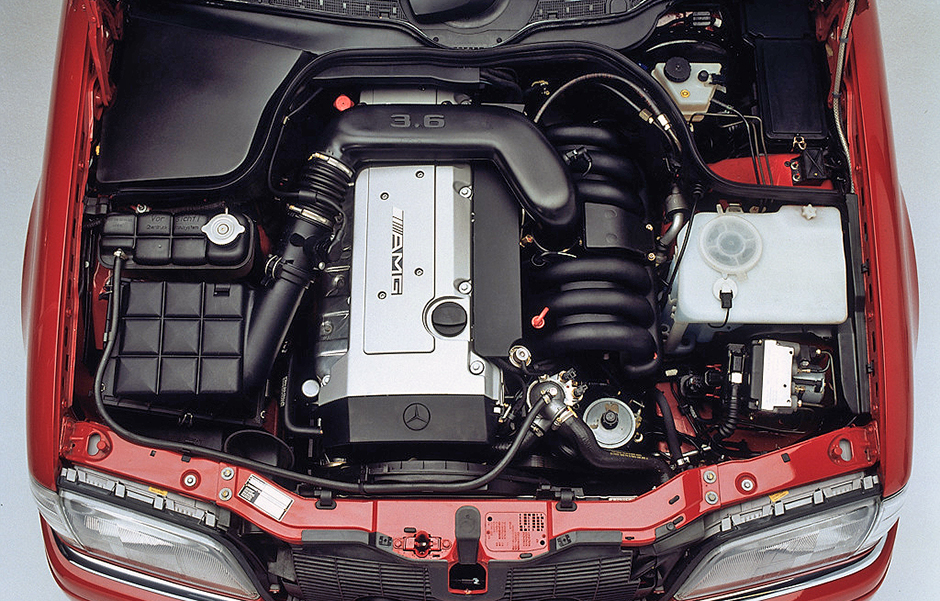 All in all, the C 36 AMG delights everyone with its superior poise. This is also thanks to the suspension tuning, which finds a successful compromise between firm sports car suspension and the more comfortable damper configuration of a refined saloon. And the four-speed automatic transmission also impresses – as testified by the specialist magazine “Auto Motor und Sport” in its 20/1994 issue: “It shifts quickly and unobtrusively, immediately reacts to kickdown and thanks to the selector lever surround it boasts effortless manual gear changes. On winding routes not only can this enhance the joy of driving; it can also increase the harmony of motion”. Equipping the high-performance saloon with traction control system (TCS) also made exploiting the engine output an acceptable pleasure with no regrets.

Twenty-five years ago the C 36 AMG was in the initial stage of direct cooperation between Mercedes-Benz and AMG – an outstanding success story. In 1999 the Stuttgart group took over a majority stake in AMG, and since 2005 Mercedes-AMG GmbH has been a wholly-owned subsidiary of Daimler AG. Today the passion for performance with sporty top models characterises virtually all segments of the Mercedes-Benz passenger car range with more than 50 different models. Since 2009 the performance brand has also been demonstrating the high level of development expertise with sports cars developed completely autonomously, such as the SLS AMG and the Mercedes-AMG GT.

The powerful C from AMG in model series 202 of 1993 sounded the starting signal for this development. The flagship C-Class was an instant success and became the first high-volume production model in the history of Mercedes-AMG: by March 1997, the 5,000th vehicle had been delivered. Six months later in the autumn of 1997, when more than 5,200 vehicles had been produced, the C 36 AMG was superseded by the Mercedes-Benz C 43 AMG – the first C-Class with a V8 engine. In June 1996 the C 36 AMG started a tradition that continues to this day when the Affalterbach-based brand provided the official safety car in Formula 1 for the first time. 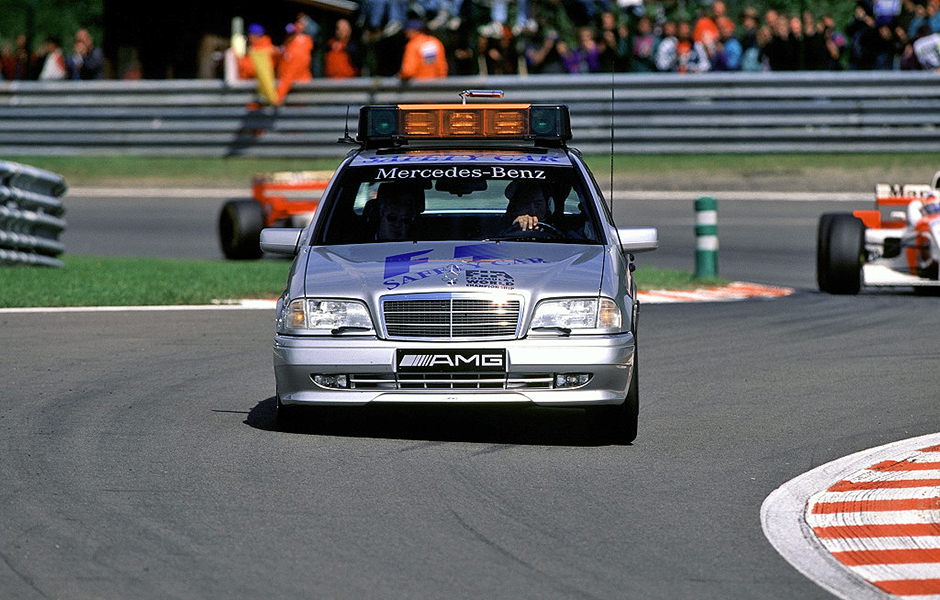 In June 1996 the C 36 AMG was used as the official safety car for the Formula One series, a tradition that continues today with AMG models leading the way.