The beginning of an enduring style: 1961 220SE offered 120 hp and fuel injection but retained the 13″ wheels carried over from the ‘Fintails.’

Within the framework of the inauguration of the Daimler-Benz Museum in Unterturkheim on February 24, 1961, the new Mercedes-Benz 220 SEb Coupe was launched. The elegant and representative new design was the successor to the 128-series Coupe production of which had been discontinued as early as October 1960. In terms of its engineering and styling, the new car was modeled on the 220 SEb Saloon presented in August 1959 and likewise allocated to the 111 series.

“From whichever angle one looks at this car, one is always struck by its racy elegance and aesthetic balance of stylistic elements.”

Unlike its predecessor, the Coupe was based on the full-length frame/floor unit of the Saloon and was therefore a fully-fledged four-seater. Although the fintails, which caused quite a stir when the 220b and 220 SEb were presented, were only rudimentary on the new Coupe, both Coupe and Saloon had numerous stylistic features in common. It is therefore all the more surprising that the Coupe did not share a single body-in-white part with the four-door model.

Engine and chassis were adopted from the Saloon without any modifications worth mentioning. The only significant difference was also a technical titbit: the 220 SEb Coupe was the first Mercedes-Benz production car equipped with disc brakes on the front wheels.In August 1961, a Cabriolet variant of the 220 SEb was introduced, corresponding in all its details to the Coupe with the exception of the soft-top and the required bodywork reinforcements. 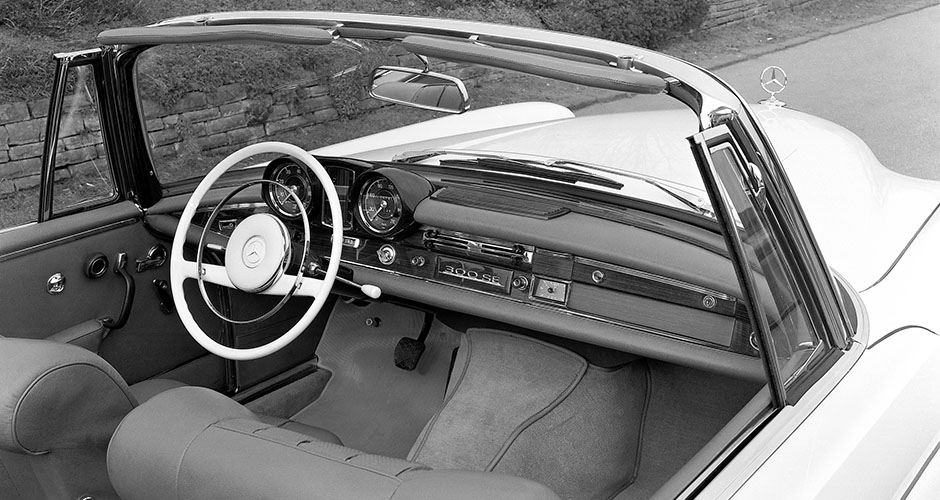 Opulence at its ’60s finest: this 300SE Cabriolet interior typified the coachbuilt ethos Mercedes-Benz adopted for the 111/112 two-doors. Note the radio blank-off plate with ‘300SE’ insignia.

Fitted luggage, long a Mercedes tradition, was available for the 111s as well. This six piece set fits beautifully in the massive trunk of this early 220SE coupe.

Six months later, the 300 SE Coupe and 300 SE Cabriolet made their debut at the Geneva Motor Show, created, in a way, from parts from a modular kit. The bodywork of the related 220 SEb variants were fitted with additional trim and combined with the engineering of the 300 SE. Accordingly, the new exclusive models allocated to the 112 series like the basic Saloon were equipped with a whole series of special technical features.

The standard specifications included a light-alloy engine with a displacement of three liters, a four-speed automatic transmission, power steering, air suspension and a dual-circuit brake system with disc brakes on the front and rear wheels. The additional chrome trim consisted of a chrome strip running in the longitudinal groove from the headlamps all the way to the rear lights, as well as of distinctive trim strips on the front and rear wheel arches.

A brochure of 1963 commented on the design: “From whichever angle one looks at this car, one is always struck by its racy elegance and aesthetic balance of stylistic elements. It is its superior appearance; forward-looking, yet without a hint of fashionable gimmickry which holds the observer in its thrall.”

From March 1963, the 300 SE Coupe and Cabriolet as well as the Saloon became optionally available with a four-speed manual transmission, reducing the list price by 1,400 Deutschmarks. In January 1964, engine output was raised to 125 kW, resulting in improved performance. This increase in output was made possible by replacing the injection system by a six-plunger injection pump. 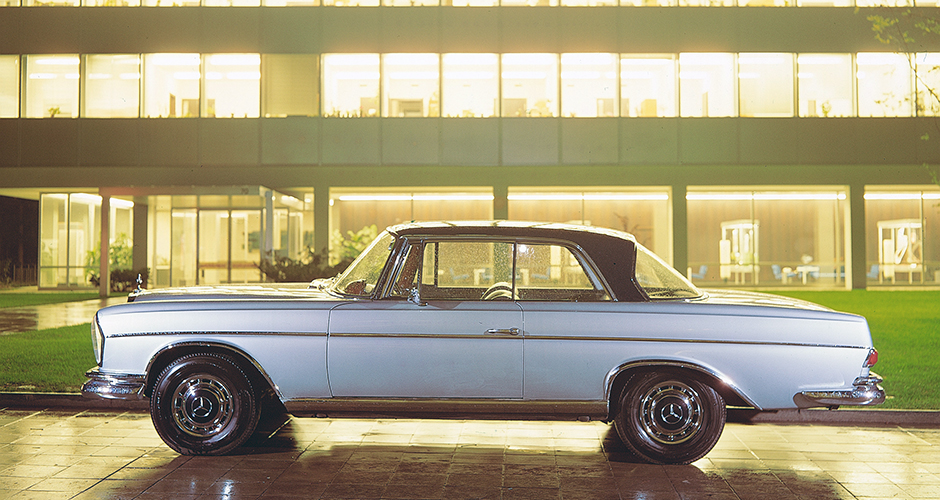 A one-off unit for the Chief Engineer

A special one-off version of the 300 SE Coupe was set up in the test department in 1962. The rear end of the roof with the rear screen was removed and replaced by a folding top. The result of this modification was a landaulet which was driven by chief engineer Fritz Nallinger for several years. Unfortunately, nothing is known about the subsequent fate and whereabouts of this interesting one-off car.

When the 220 Sb, 220 SEb and 300 SE fintail Saloons were replaced by a newly designed generation of models in August 1965, the Coupe and Cabriolet versions remained in the sales range for the time being. These exclusive models, which had been in production for four years at the time, were far from looking outdated alongside the new-generation Saloons, so that an expensive stylistic refinement or even a new development of the small-series versions was not necessary. The brochure promised this: “You will see for yourself that Mercedes-Benz passenger cars will give back to you something that has become extremely rare in today’s road traffic: your freedom and composure.”

Several new features introduced with the new Saloons were also incorporated in the Coupes and Cabriolets. The two 2.2-litre models were given the 110 kW 2.5-litre engine of the 250 SE and the corresponding model designation. Like the three-liter models, they were also equipped with the larger wheels (diameter: 35.5 centimetres) and the larger disc brakes of the 108 luxury series. Another new feature was the hydropneumatic compensating spring on the rear axle, fitted in place of the previous coil spring in the 2.5-litre models and keeping the car at a constant level irrespective of the load in the car.

In January 1968, the 280 SE made its debut, succeeding the 250 SE with a newly developed 2.8-litre six-cylinder engine with 118 kW. This change of generation affected both the Saloon and the two two-door versions. With the exception of the new engine, only detail modifications were made on the Coupe and Cabriolet: like the Saloon, both models were given flatter, undivided wheel covers with integrated hub caps. Production of the 300 SE Coupe and Cabriolet was discontinued at the same time as that of the 2.5-litre models. A direct successor was not planned for the time being but wasn’t really necessary, either, as the 2.8-litre engine developed only a little less output (7.4 kW) but had a comparable performance on account of its considerably reduced weight. 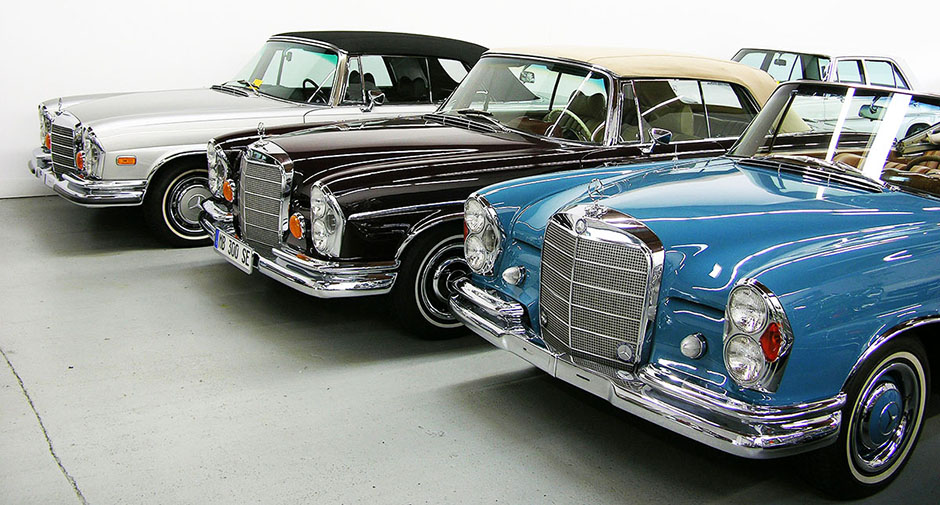 Top to bottom: 3.5 cabriolet ended the series and is visually notable by it ‘low grille’ profile. An exotic 300SE cabriolet sits on the middle and featured the big 3.0 liter alloy six and air suspension. The light blue 220SE began the series in 1961.

In September 1969, clearly more powerful versions of the 280 SE 3.5 Coupe and Cabriolet were introduced. The completely newly developed 3.5-litre V8 engine with an output of 147 kW excelled in particularly smooth running characteristics and gave the car a sports-car-like performance. The new models had been stylistically refined to a certain extent, like the versions with 2.8-litre six-cylinder engines which continued to be on sale: the radiator mask was lower and wider, with a correspondingly flatter front end of the engine hood. Due to this characteristic feature, the face-lifted Coupes and Cabriolets were often referred to as the flat radiator (low grille – ed.) models by insiders. As on the Saloons, the bumpers of the Coupes and Cabriolets were now fitted with rubber strips. In purely visual terms, the eight-cylinder models did not differ from the face-lifted six-cylinder versions.

There were no direct successors to the Coupes from the W 111 and 112 series. Instead, Mercedes-Benz offered Coupes from the C 107 series, whose engineering was based on that Production of the six-cylinder Coupes and Cabriolets was discontinued in May 1971. When production of the eight-cylinder models ceased two months later, the era of the Coupes and Cabriolets from the 111 and 112 series came to an end after more than ten years. In the Sindelfingen plant, 28,918 Coupes and 7,013 Cabriolets had been produced. The highest production volume within the model family had been reached by the 220 SEb Coupe with 14,173 units.

There were no direct successors to the Coupes from the W 111 and 112 series. Instead, Mercedes-Benz offered Coupes from the C 107 series, whose engineering was based on that of the SL, between 1971 and 1981. 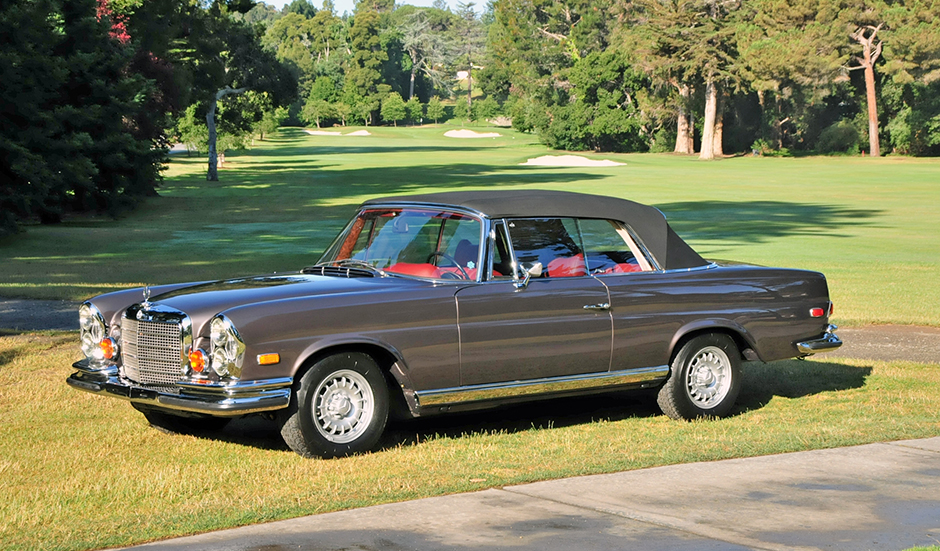 The 111/112 Cabriolets offered luxurious open touring for 4 although rear seat passenger room was limited. This end-of-series 280SE 3.5 Cabriolet offers a good look at the ‘low grill’ nose design. Alloy wheels were an option.