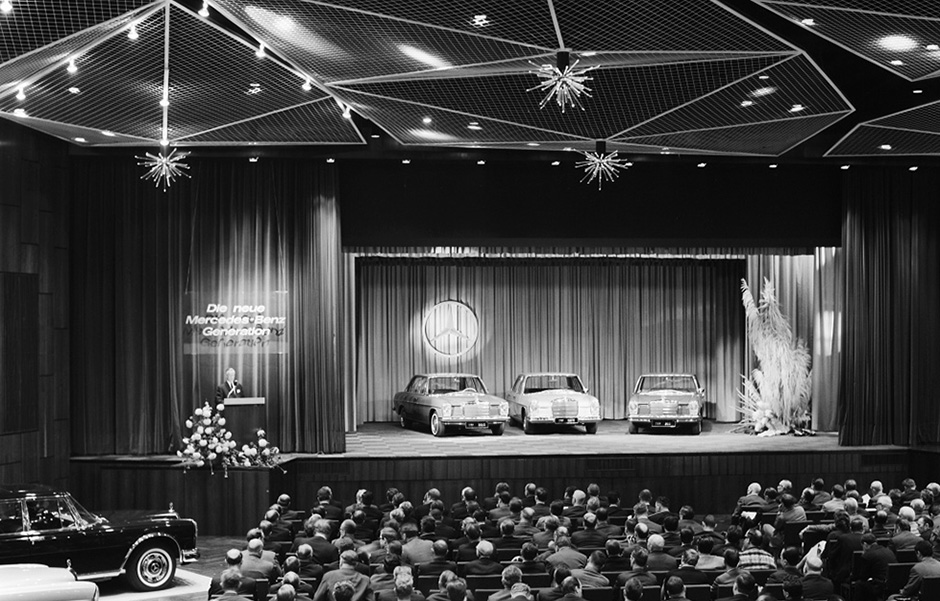 Precisely 50 years ago, on 9 and 10 January 1968, Mercedes-Benz unveiled the completely redeveloped saloons in the upper medium-size category in Sindelfingen. They are divided up into the model series W 115 (four- and five-cylinder engines) and W 114 (six-cylinder engines). The model series from the E-Class ancestral line impressed with its clear design idiom and a design autonomous from that in the luxury segment. The success of the “Stroke/8”, as fans later nicknamed this vehicle generation, due to the suffix “/8” in the model designation, was overwhelming: for the first time more than 1 million units of a Mercedes-Benz vehicle family were sold. Alongside the saloons, they also include coupés, saloons with a long wheelbase and chassis for special bodies. Today the “Stroke/8” is a coveted classic model series family from the Stuttgart brand. Particularly attractive specimens are regularly to be found in the offering from ALL TIME STARS, the Mercedes-Benz Classic vehicle trading place.

Stuttgart. 50 years ago “The new Mercedes-Benz generation” celebrated its premiere. At the centre of the vehicle presentation with this motto on 9 and 10 January 1968 were the completely redeveloped saloons in the upper medium-size category. They superseded the “fintail” saloons launched in 1961 with four-cylinder engines (W 110).

The new vehicle family belonged to the model series W 115 (four- and five-cylinder engines) and W 114 (six-cylinder engines). On the exterior the respective models were identical in their dimensions. They could only be told apart by items of equipment plus radiator grille and bumper variants. At market launch the diesel-engine models 200 D and 220 D and the models 200, 220, 230 and 250 were available with a petrol engine. The range was subsequently extended yet further.

The stylistically and technically very modern vehicles represented a minor revolution. However the new upper medium-size category had nothing in common with the wild student protests of 1968. Instead Mercedes-Benz used the “Stroke/8” saloon to successfully sharpen the profile of this market segment – the future E-Class. This development took on particular importance because the Stuttgart brand extended the model series family in the same year to include coupés (market launch in November 1968) and saloons with a long wheelbase (market launch in December 1968). Mercedes-Benz was thus now offering an extensive portfolio of various body forms and engines in the autonomous upper medium-size category. 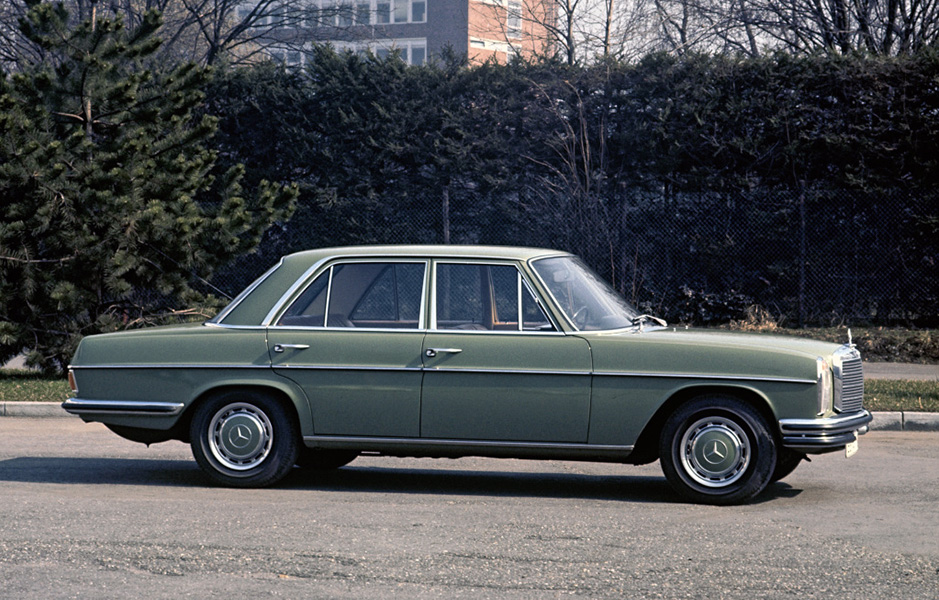 Even at first glance the “Stroke/8” impresses with its clear and harmonious design which Paul Bracq created in the Stylistics department headed by Friedrich Geiger. There were also new technical design features such as the rear diagonal swing axle. The engineers used it to achieve their aim of combining the brand’s hallmark ride comfort with further improved driving comfort. The specialist journal “auto motor und sport” said the following in its 4/1968 issue about the 200 (W 115) and 250 (W 114) models: “The wet and icy Hockenheimring confirmed the experiences gained on the Targa Florio route: driving stability is considerably improved with the new axle”. The article’s headline sums up the overall impression given by the “Stroke/8”: it calls the new upper medium-size category from Mercedes-Benz “well-calculated perfection”.

Development of the new vehicle generation started in 1961. Prof. Dr Fritz Nallinger, Member of the Board of Management responsible for Development at the then Daimler-Benz AG, was keen right from the outset to differentiate the new model from the luxury-segment vehicles to a greater extent than before. This meant that an end was finally put to the universal body, as used for the “self-supporting chassis-body structure” and “fintail” saloons. The specifications book envisaged a more compact vehicle than the W 110, but one which still offered the same amount of space on the inside. New chassis designs were also to improve the handling yet further. An early decision was taken to extend the drive system palette to include engines with six cylinders.

A saloon with harmonious proportions was created with a wheelbase 50 millimetres longer than that of its predecessor, so 2750 millimetres, whilst the overall length was reduced by 55 millimetres to 4680 millimetres. The saloons were also 25 millimetres narrower and 55 millimetres lower than the small “fintails”. Mercedes-Benz verified developments in passive safety with measures including 26 crash tests. They showed that the “Stroke/8” not only met the US standards in force at the time for a collision at up to 30 miles an hour with 100-percent coverage; it exceeded them significantly.

The chassis was also considerably enhanced compared with the W 110. The two subframes were linked with the body via soft rubber bushes. At the front axle, double wishbones with offset pivots reduced dipping of the front section during sharp braking. At the rear the newly designed “diagonal swing axle” was used, a semi-trailing-arm rear axle. It reduced track and camber variations in bends and during compression and rebound. For the first time in the upper medium-size category from Mercedes-Benz all four wheels were equipped with disk brakes. A power steering system and hydraulic level control system were optionally available. 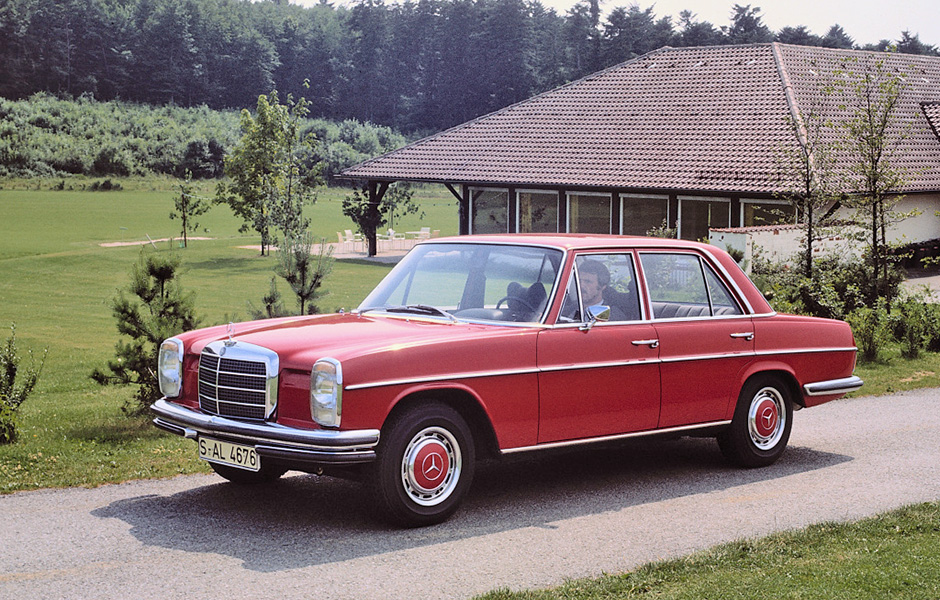 Model of success in E-Class history

In the classic-car scene the vehicles built in the upper medium-size category by Mercedes-Benz from 1968 to 1976 were known as the “Stroke/8”. But this designation for the model series did not originate from the brand itself. Rather, it came from fans’ usage some time after the premiere in January 1968 – derived from the abbreviation “/8” which identified the 1968 models in the range.

The abbreviation “Stroke/8” then became the catchy name for all the variants in this upper medium-size category. These also included the top engine versions 280 and 280 E (1972) as well as the 240 D 3.0, the first five-cylinder passenger car in the world, which came out following the 1973 facelift.

The market launch came hot on the heels of the premiere of the four-door saloons in January 1968. The four-door saloon with six windows and a wheelbase extended by around 650 millimetres was built as of March 1968. In contrast to the standard saloons, Mercedes-Benz equipped this long version as a matter of course with the larger 15-inch wheels due to the modified angle of approach/departure and a correspondingly lower rear axle ratio. October 1968 then saw the construction of the two-door coupé. The sporty, elegant two-door model had the same wheelbase as the saloons but was 45 millimetres lower. The backrests of the front seats locked through a vacuum were automatically released when the doors were opened, thus facilitating good access to the bench seat in the rear. In contrast to the saloon the rear bumper was brought forward up to the rear wheel cutouts at the side.

The “Stroke/8” proved to be a runaway model of success: for the first time Mercedes-Benz made more than 1 million saloons of one model series family – in total 1.8 million. And there were even more than 1.9 million units of all body variants sold. And it is fitting that the two millionth passenger car produced since 1946 by Mercedes-Benz is also a “Stroke/8”. The model 220 D saloon rolled off the line on 9 May 1968 at the Sindelfingen plant. The last “Stroke/8” vehicles were built in 1976 – at a point in time when production of the successor model series W 123 was already under way. 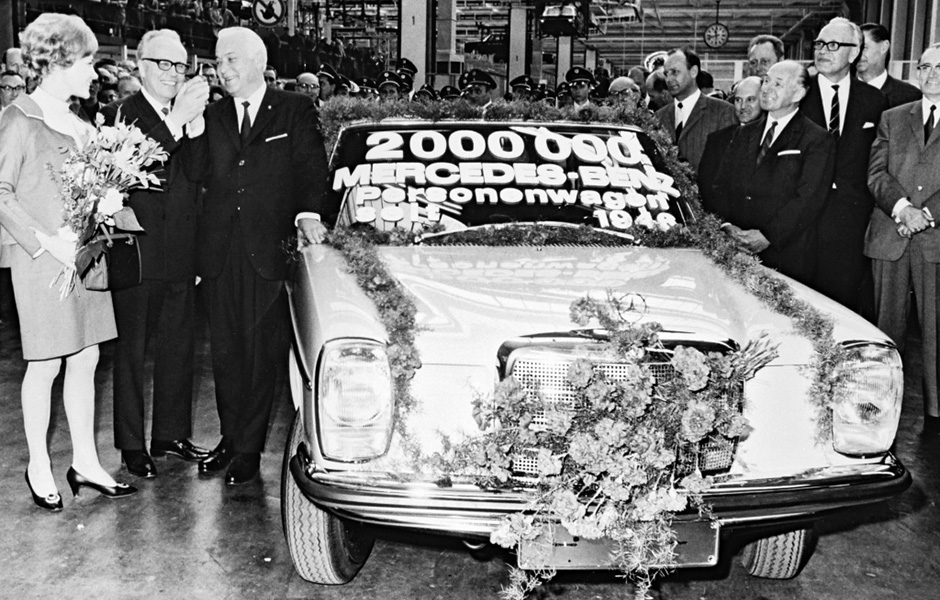 Today the “Stroke/8 saloons and coupés are coveted classics. At regular intervals particularly attractive vehicles from the model series are to be found in the offering from ALL TIME STARS, the Mercedes-Benz Classic vehicle trading place. The ALL TIME STARS range is based on maximum transparency and was founded in 2015 to include classic cars and young classics which are subjected to thorough 160-point checks. And each goes on sale with a Classic Data Certificate showing that it has scored at least 2 for technical condition. The vehicles are classified in three editions: Concours Edition, Collectors Edition and Drivers Edition. ALL TIME STARS has a permanent showroom on Level 0 of the Mercedes-Benz Museum, the web-based digital sales platform at http://www.alltime-stars.com/ and is present at numerous occasions such as specialist trade fairs and events.