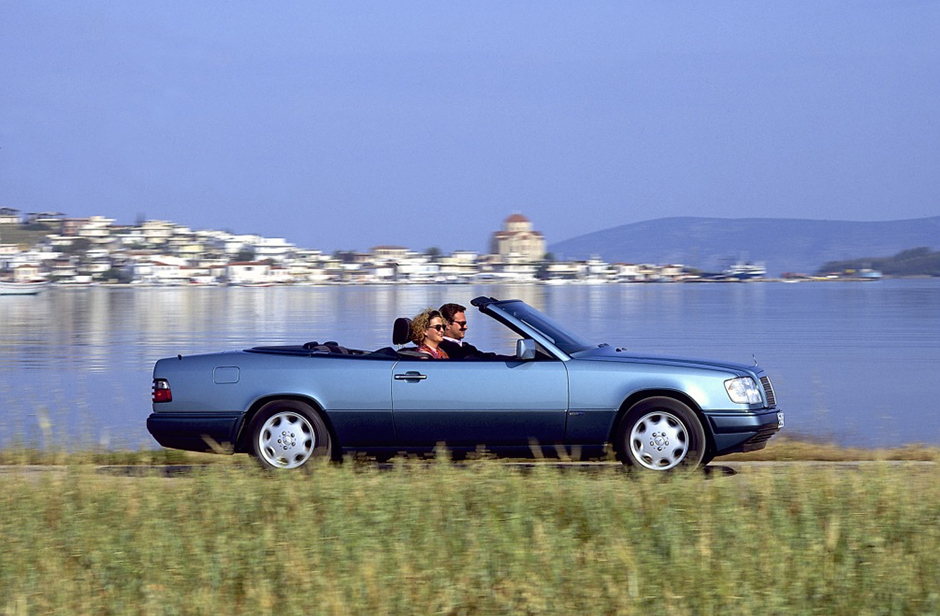 Mercedes-Benz presented a sunny outlook for the upper medium class at the 1991 International Motor Show (IAA) in Frankfurt/Main. That is where an elegant convertible celebrated its September premiere 25 years ago. The four-seater model with a fabric soft top belonged to the 124 series, which bore the name E-Class from 1993 onward. The debut at the IAA show also continued a success story for the Stuttgart-based brand, as Mercedes-Benz was now once again offering a four-seater convertible after a 20-year interruption. This form of body is well represented in the current Mercedes-Benz model range, by the open-top versions of the C-Class, E-Class and S-Class with different engine variants.

Stuttgart. In the new Cabriolet model positioned in the upper medium class, Mercedes-Benz skillfully combined the airiness of open-top driving with the virtues of the Saloon model in this series. This new body version of the 124 series impressed with its innovative technology, modern elegance and a perfectly balanced overall concept. From the very start, this gave the open four-seater known internally as the A 124, and initially available as the 300 CE-24 from spring 1992, the potential to become a classic. Other available variants of the 124 series were the Saloon (W 124), Estate (S 124), Coupé (C 124) and long-wheelbase Saloon (V 124). The engineers used the Coupé as the technical basis for the new convertible.

The 300 CE-24 Cabriolet revived the long tradition of four-seater open-top models in the brand history of Mercedes-Benz after a 20-year interruption: the last previous models with this body form were precursors to the S-Class, the 280 SE Cabriolet and 280 SE 3.5 Cabriolet (W 111) produced until 1971. In the intervening period Mercedes-Benz continued its open-air driving tradition with the two-seater SL sports cars. The A 124 remained in production until 1997, with 33,952 examples produced in total, and its success was seamlessly continued by the CLK Cabriolet models in the A 208 series (1998 to 2003) and A 209 series (2003 to 2010), followed by the E-Class Cabriolet in the A 207 series (since 2010). 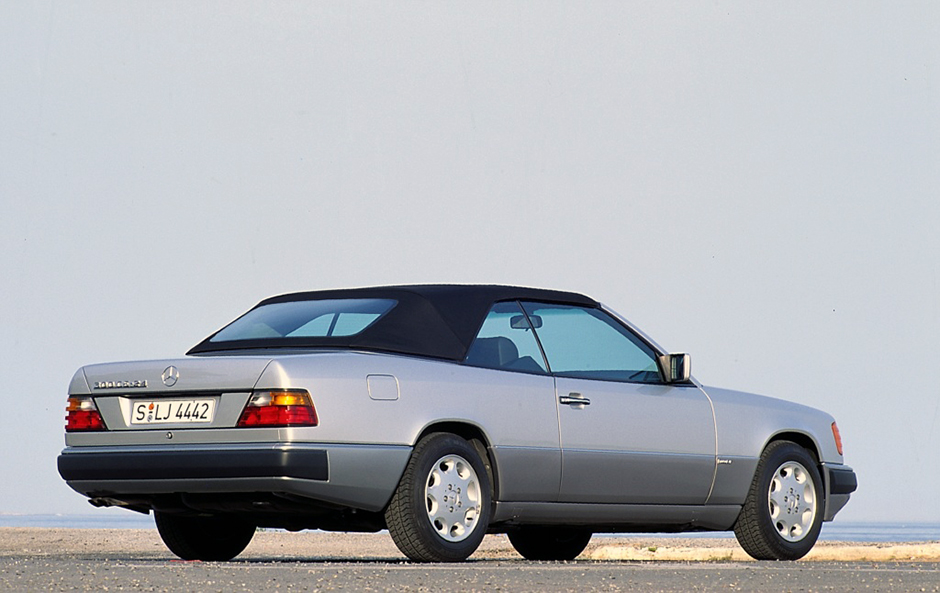 The engineers took great pains when developing the Cabriolet on the basis of the Coupé. Part of this effort went into making the bodyshell more rigid, so as to make the open four-seater as comfortable and safe as the other members of the model family. To this end around 1000 components were completely redesigned. Structural components were produced from thicker or high-strength sheet steel.

All areas subject to high stresses were additionally reinforced with duplicators, gusset plates or struts. These also included the diagonal struts familiar from the R 129-series SL sports cars. Vibration dampers were also installed in the left suspension strut, the roof frame and the side boot recesses. These reduce the annoying body vibrations that can occur in open-top cars owing to the lack of a roof structure.

The overall package of measures taken for the bodyshell not only made the Cabriolet comfortable, but also as safe as the Saloon, Estate or Coupé in a frontal, rear or side collision. For protection in the event of a rollover, the A-pillars were welded to form a robust unit in the area vulnerable to deformation, and an automatic rollover bar was installed. The retractable soft top weighing 43 kilograms was based on a 27-part linkage with 34 joints. When folded down, the soft top occupies a space of only 80 litres and leaves adequate boot capacity. 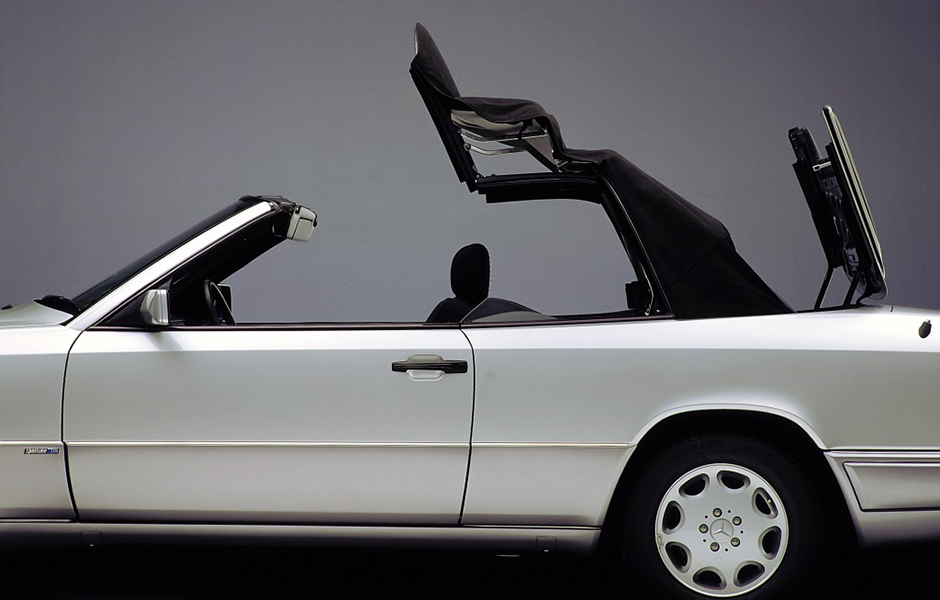 In June 1993 Mercedes-Benz already presented the facelifted generation of the 124 series. Like all the other variants in the model series, the Cabriolet now also bore the name E-Class. The open four-seater was considerably revised in its styling, and now also became available in a wider range of versions. The variants available were the four-cylinder E 200 Cabriolet (100 kW / 136 hp, before 1994 only as an export version) and E 220 Cabriolet (110 kW / 150 hp), the six-cylinder E 320 Cabriolet (162 kW / 220 hp) and the flagship E 36 AMG Cabriolet (200 kW / 272 hp). Previously only available at extra cost, electrohydraulic roof operation was now standard equipment and the soft top was given a new inner lining for even better thermal and noise insulation.

The first E-Class Cabriolet was in production until 1997. 15,380 customers opted for a four-cylinder version, while 18,572 buyers decided on a six-cylinder model. Many of these buyers were export customers. At around 75 percent, the export proportion was especially high for the E 320 Cabriolet. 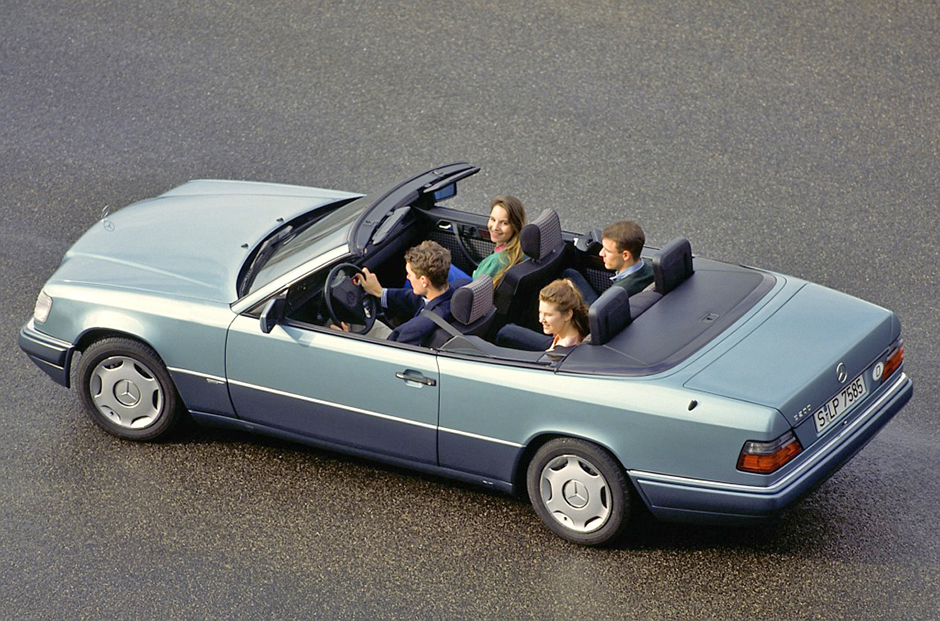 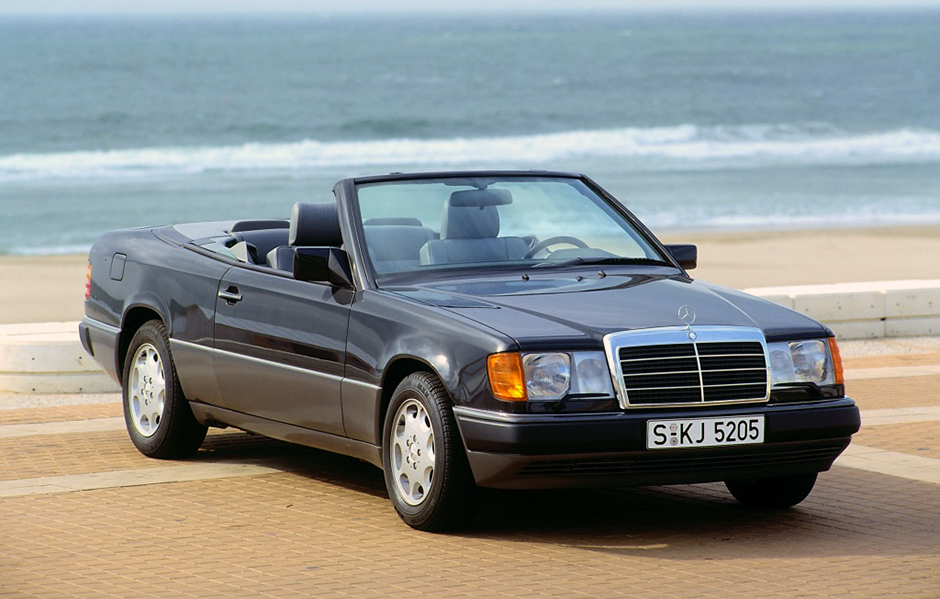