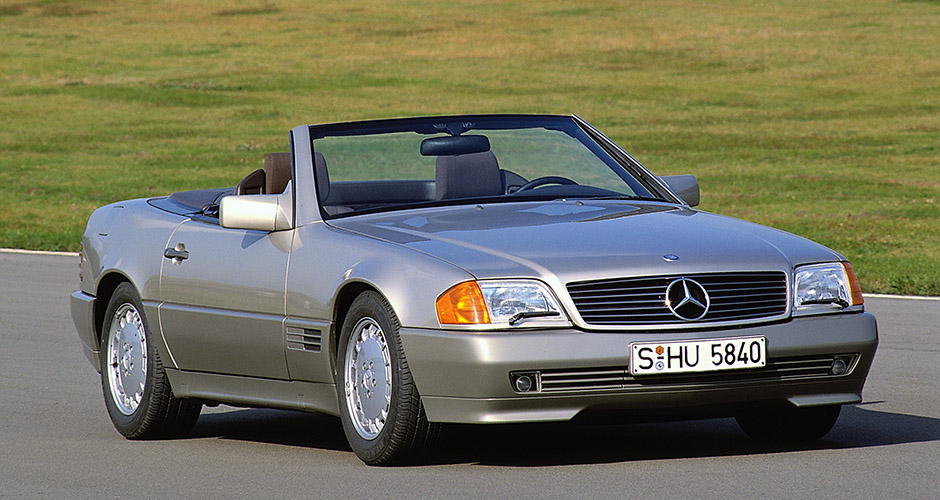 First generation of the 129 reveals mid ’80s style alloys, contrasting matte colored bumpers and side cladding. Build quality was exceptional and Mercedes enthusiasts around the globe clamored for the car.

Modern, elegant, dynamic and yet clearly part of a great tradition: the SL Roadster from Mercedes-Benz was one of the biggest sensations at the Geneva Motor Show in March 1989. This sports car (model series R 129) first appeared in the 300 SL, 300 SL-24 and 500 SL variants, with several models being added in subsequent years through to the SL 73 AMG in 1999. The R 129 was the fourth generation of the SL-Class since the legendary gull-wing Mercedes-Benz 300 SL of the 1950s. In 2001, the 129 model series was replaced by the 230 series.

The SL models in the 129 series featured compelling technical innovations and a good balance between classic elements and new design. However, this generation of sports car also involved two changes to the SL tradition: firstly, the SL was built in Bremen rather than Sindelfingen and secondly, the Mercedes-Benz nomenclature was revised while the R 129 was being produced. In the summer of 1993, the Stuttgart-based brand adapted the model designations for its open-top sports cars to the nomenclature initially introduced for the C-Class and used up to the present day. From then on, the legendary abbreviation “SL” would appear in front of the three-digit number that indicates engine displacement. The 300 SL thus became the SL 300, making the
300 SL from the 129 model series the last Mercedes-Benz sports car for the time being to bear this legendary model designation.
The automatic roll-over bar is debuted

Harmony was the hallmark of the modern new design elements that were introduced. Although dispensing with the traditional chrome surround around the SL radiator grille, with its fluid wedge shape the R 129 clearly followed in the tradition of its predecessors. Elegant design was backed by the concept of an automatic roll-over bar which only deploys in an emergency. Normally, it was not possible to see the protective structure when the car was being driven with the top down. If there was a danger of overturning, however, a sensor released the locking mechanism on the bar by electromagnetic means and the integral support rose in just 0.3 seconds. The driver could also deploy the bar hydraulically as required. The automatic roll-over bar in this form on the R 129 was an international first in automotive engineering.

In addition to the roll-over bar, the windscreen A-pillars made of high-strength steel, the twin-shell front roof frame and bonding the windscreen to the vehicle body contributed to a very high standard of safety on a par with that of the Mercedes-Benz saloons and coup’s. The engineers achieved a high level of stability in the open-top sports car’s passenger compartment by making the floor assembly particularly rigid using high-strength sheets and large cross-members, as well as creating transitions that were resistant to bending from the A-pillars and rear side elements to the side longitudinal members. Thanks to the special design of the beading on the inside, the doors also acted as an impact-resistant connection between the front wall and centre pillars. The engineers developed the front-end concept on saloons further for the SL vehicle body in order to ensure maximum safety in the event of an offset frontal impact. 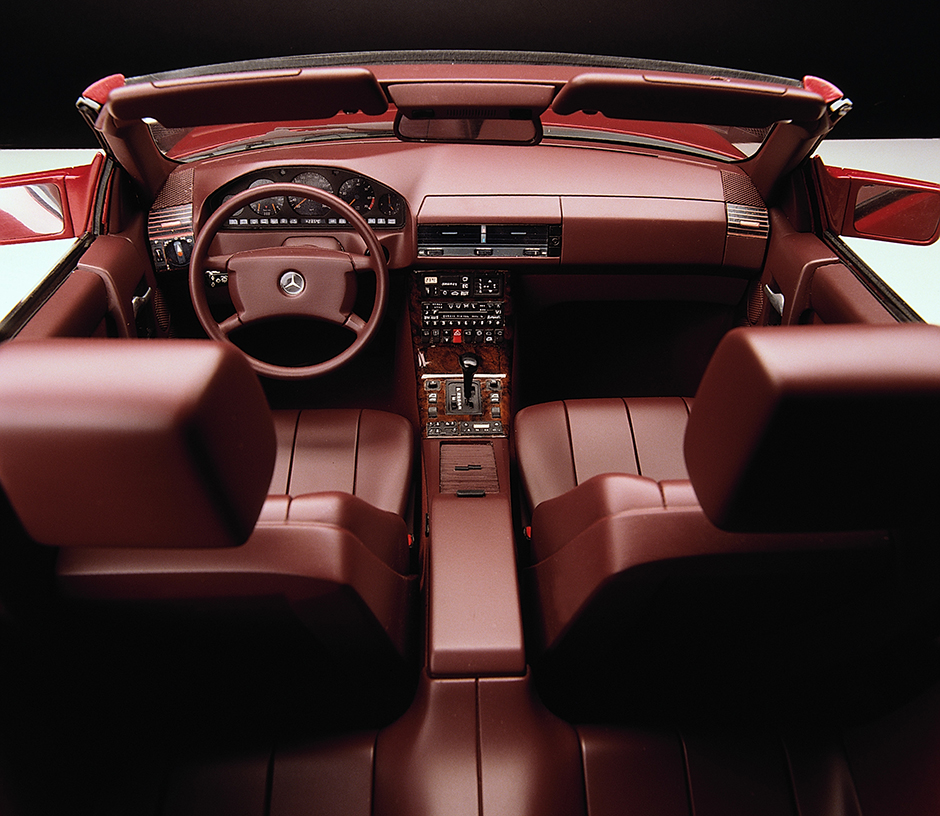 Sophisticated elegance: the interior of the original Mercedes-Benz SL. Revisions would arrive in 1996.

High standards of safety and comfort

The developers placed just as much emphasis on passenger comfort as on safety. One aspect encompassing both these areas was the new integral seats featuring excellent ergonomics for relaxed travel on long journeys. Due to their load-bearing structure and high transverse rigidity, they also offered enhanced protection in the event of a side impact. The load-bearing seat frame consisted of five die-cast magnesium parts and included the seat belt system with belt tensioner, seat belt height adjustment coupled to headrest adjustment, plus fully electric adjustment.

The new electrohydraulic soft top offered great convenience: it opened or closed within 30 seconds at the touch of a switch. When the top was down, another innovation came into play: the draught-stop, a screen which lets air through and can be attached to the roll-over bar in a flash, thereby minimising wind noise and draughts. As standard, the new SL models had electric windows and electropneumatic central locking. Electric steering column adjustment was initially restricted to the 500 SL.

A roadster featuring the torsional strength of a saloon

The roadster’s ride comfort was improved by installing additional diagonal struts and other reinforcements which optimised the vibration and torsional characteristics typical of open-top vehicles. The engineers’ expertise paid off and the torsional strength of the new roadster was 30 percent more than that of the preceding model and now equivalent to that of a saloon.

The chassis with damper strut front suspension and multi-link independent rear suspension was of the same basic design as that of the W 201 compact-series models and the executive-size W 124 series models. Numerous components were adapted specifically for the roadster, as was the axle configuration. A new auxiliary system became available as an option, representing state-of-the-art chassis technology. The three subsystems included level adjustment and control on the front and rear axles, automatic speed-dependent level control and the ADS adaptive damping system. The SL models came as standard with 16-inch alloy wheels and â€“ as you would expect from a sports car’s generously-sized brakes. For the first time, disc brakes with fixed calipers were fitted in a Mercedes-Benz passenger car with the two pairs of pistons having different diameters. The ABS anti-lock braking system was also standard equipment. 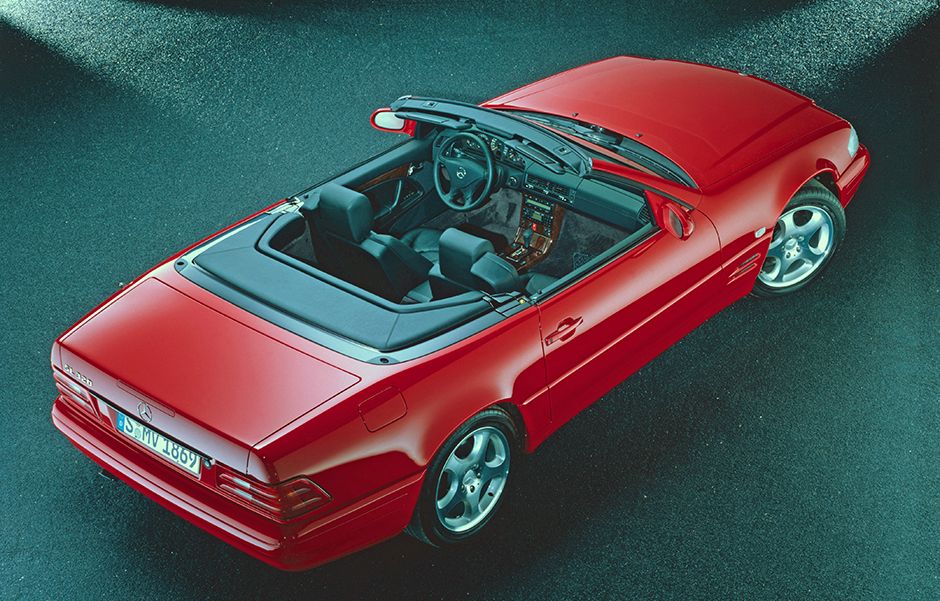 In 1995, Mercedes-Benz presented the facelifted SL models at the IAA International Motor Show. The facelift involved new design features, more comprehensive standard equipment and enhanced technology. One new feature was the headlamps with xenon gas-discharge lamps, which were introduced on the E-Class (model series 210) just a few months earlier and were now also available on the SL-Class.

Mercedes-Benz provided a new cruise control system for speed 30 zones as standard on the roadster. In September 1995, the SL 500 and SL 600 were given a new five-speed automatic transmission with torque converter lock-up clutch. The engine specialists also improved fuel consumption and emissions further.

The Electronic Stability Program (ESP) was available as an option on the facelifted SL 500, but came as standard on the twelve-cylinder SL 600 model. Brake Assist (BAS), a world premiere for active safety, was installed as standard on all 129 series models from December 1996. 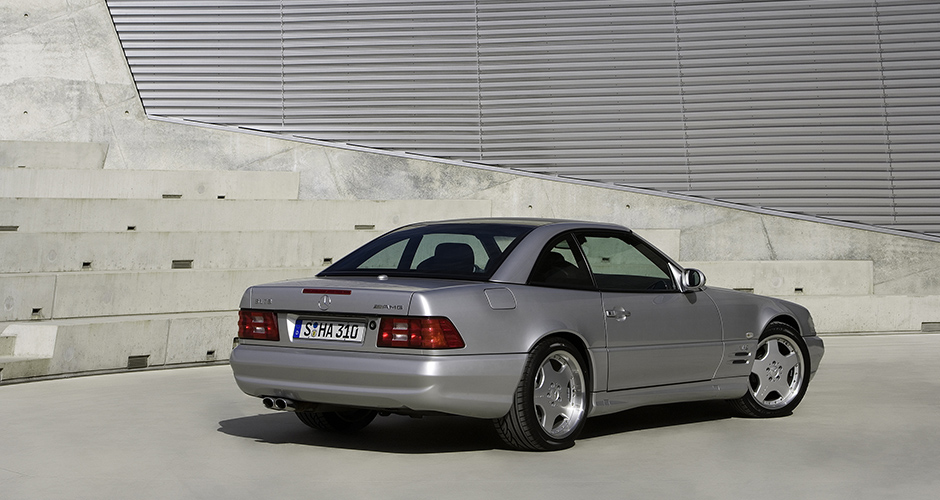 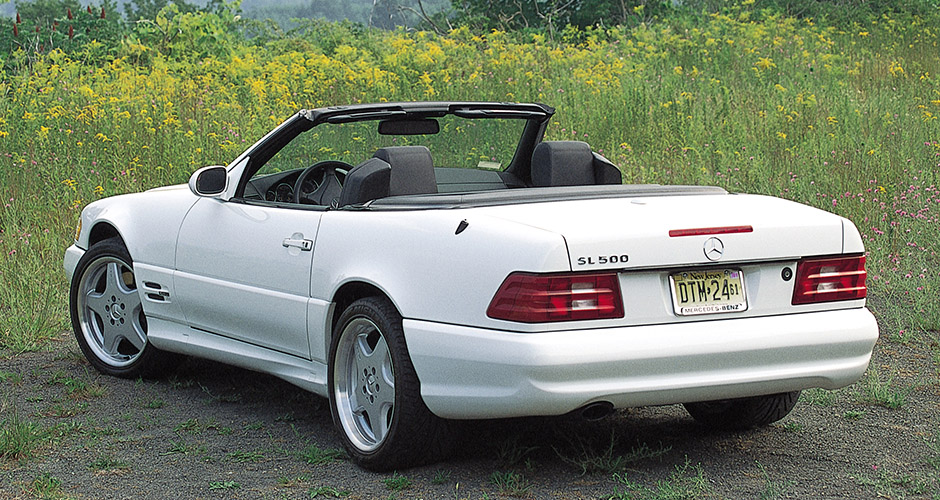