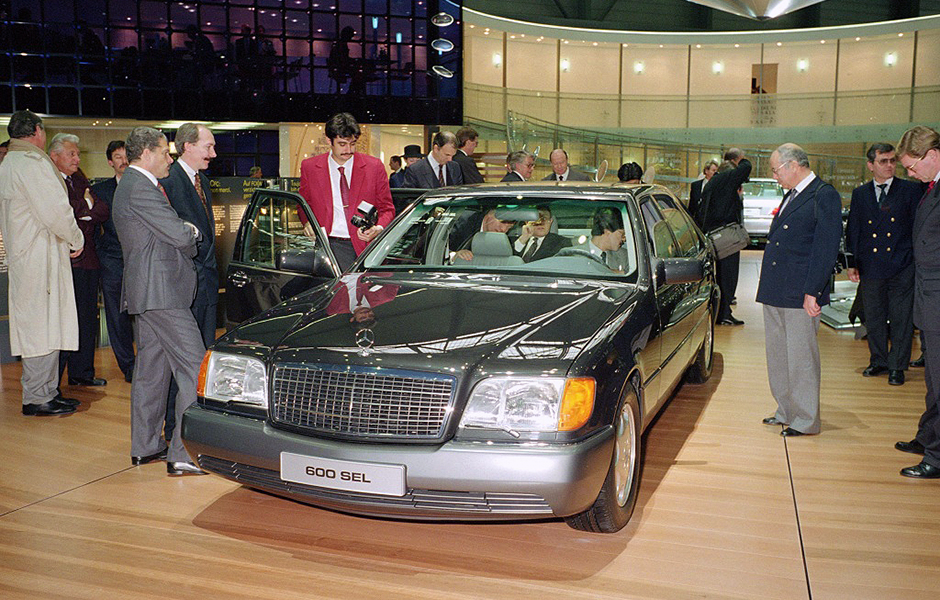 Imagine that you’re the globe’s premiere mainstream European luxury automobile manufacturer in 1989: Mercedes-Benz. And imagine that your dealer network is reporting an alarming number of your traditional S-class buyers are opting for an upstart premier luxury car manufacturer from Japan, a company called Lexus, whose parent company was Toyota.

The design for the successor to the highly respected 126 S-class series was well underway in the late ’80s but I have a feeling the threat of a well executed and less expensive competitor from Toyota forced Mercedes-Benz to flee further up market. Lexus’ LS400 was an immediate hit when introduced in 1989. I was selling new Jaguars at that time and experienced a number of my past customers defecting to the upstart Japanese brand. Mercedes-Benz also took notice.

On the domestic market of Germany there was also some irritation at the size and presence of the saloon. 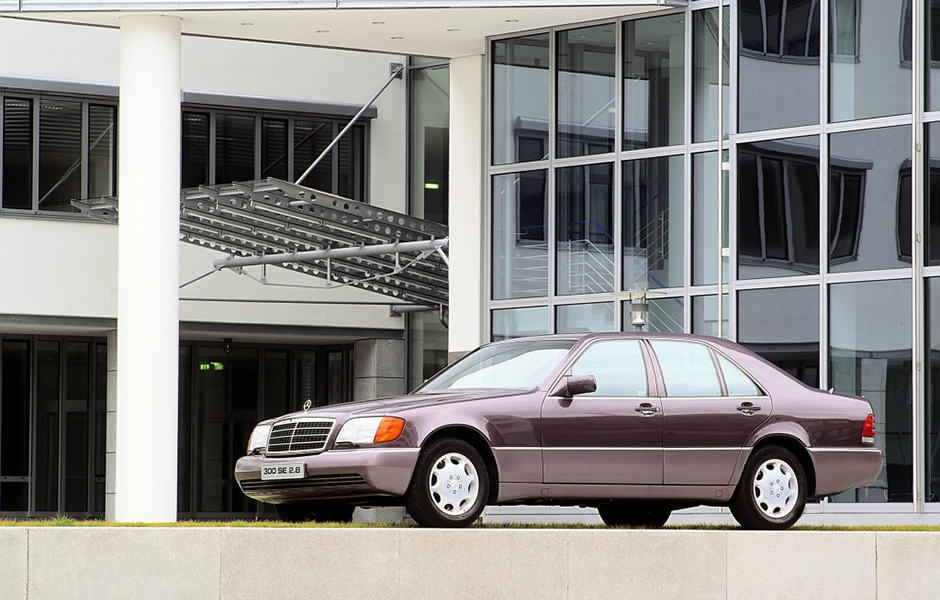 A study in vast vertical surfaces, the 140 series design was a strong departure from the crisp enduring shape of its predecessor, the 126 range. The is a Euro 300SE 2.8 liter model finished in blackberry.

Shooting for the moon.

This was an era in which Mercedes-Benz  was not forced to compete on price but simply created the finest vehicles possible, added profit and offered the cars to their clamoring buyers. The new S-class was no different although its climb up market on both the technical side and pricing was stunning. A 1991 560SEL sold new for about $75k. A well optioned new 1992 500SEL could touch $100k.

When I saw early images of production ready prototypes that reveled an upright slab sided monster heaving itself over narrow European lanes I thought to myself, “you must be kidding.” Contemporary early reviews in Germany reacted to the bulk as well noting, “On the domestic market of Germany there was also some irritation at the size and presence of the saloon.” Irritation indeed: This new S-class was massive, a new Grosser Benz.

So massive that engineers felt the need for 5″ electric antennas mounted on the rearmost tip of each quarter panel that extended while reversing allowing drivers to keep track of the distant and largely invisible tail of the car. In itself, this was quite an admission of bulk by Mercedes-Benz. But size matters as they say and those at the helm of the new cars certainly felt satisfyingly isolated from, and well above the rest of the motoring fray.

In North America, the land of expansive roadways, the new S-class was less offensive and dazzled new owners with double-paned side windows, electronic door/trunk closure, interior dimensions that suited the, ahem…larger buyers and finally a proper sound system. It was the ultimate mode of transport when heading out on a long road trip over terrain generally devoid of curves.

I’ve owned a few but oddly, I never felt suited to the car’s bulk: It was an unnatural effort to extend my elbow far enough to reach the driver’s door arm rest while cruising! Spaciousness has its practical limits. 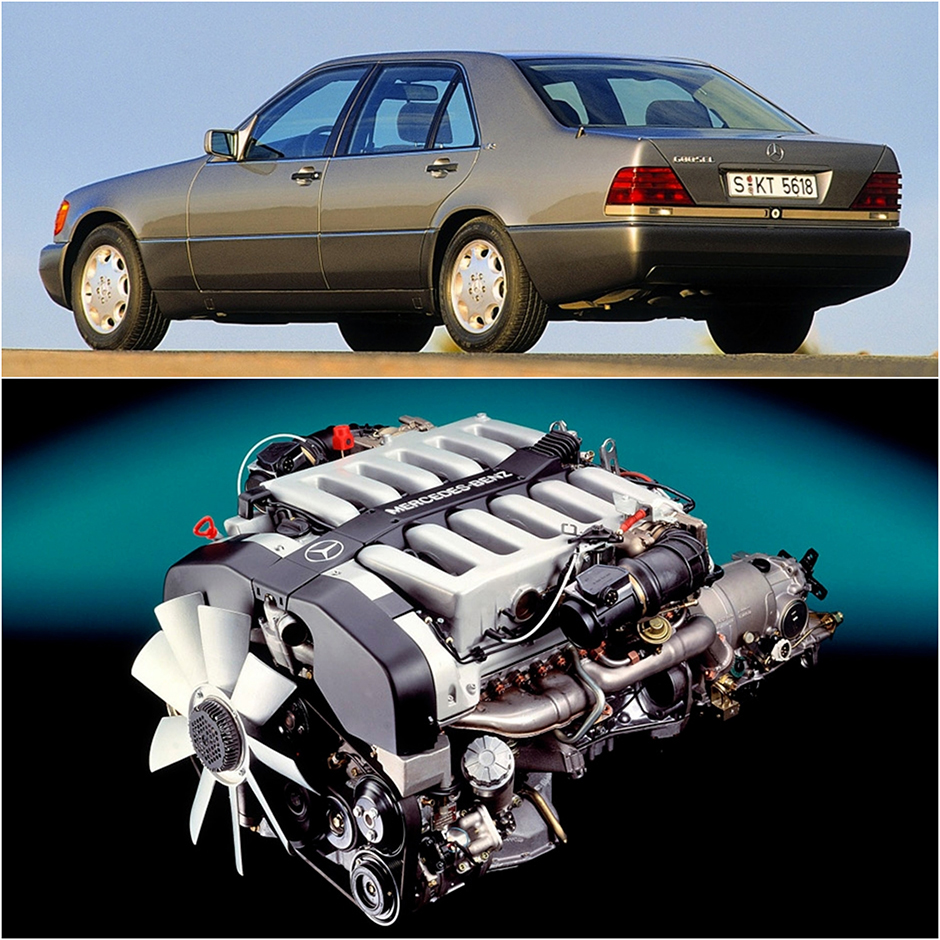 The addition of a 400HP V12 as an option in 1993 created arguably the most opulent, spacious and powerful luxury sedan money could buy. The 600SEL driving experience was otherworldly, rather like a 400HP magic carpet.

Throughout the series US buyers could choose from long and short wheelbase six cylinders, a short wheelbase 4 liter V8, the long wheelbase 5 liter V8 and the over-the-top 6 liter long wheelbase V12. And a 3.0/3.5 liter diesels were available in most states excluding California. Styling tweaks in 1994 added horizontal creases around the perimeter of the side cladding and front/rear bumper covers that relieved the overall bulkiness of the shape and gave the car a (slightly) leaner look. 1994 also saw the reversal of Mercedes’ long standing model type nomenclature, hence 500SEL became S500 and so on.

Are they collectible? The Daimler media release last year celebrating the 140’s 25 year anniversary noted that the series “is a sought after classic today.” I wouldn’t go quite that far but must admit that I was surprised with the interest in a flawless 88k mile 1999 S600 I offered a few years ago.

As is always the case with high production MB sedans, any perfectly preserved low mileage example will find an eager buyer. The 140 series is no different due to the fact exceptional examples are impossible to find. A whopping 406,717 units were built globally but few exceptional great cars exist in the US. I have my eye on a 27k miles 1999 Grand Edition and a 28k mile 1994 S500 at the moment. If you want one, buy the best one on the market and have a marque specialist inspect it to make sure car’s endemic foibles have been addressed. 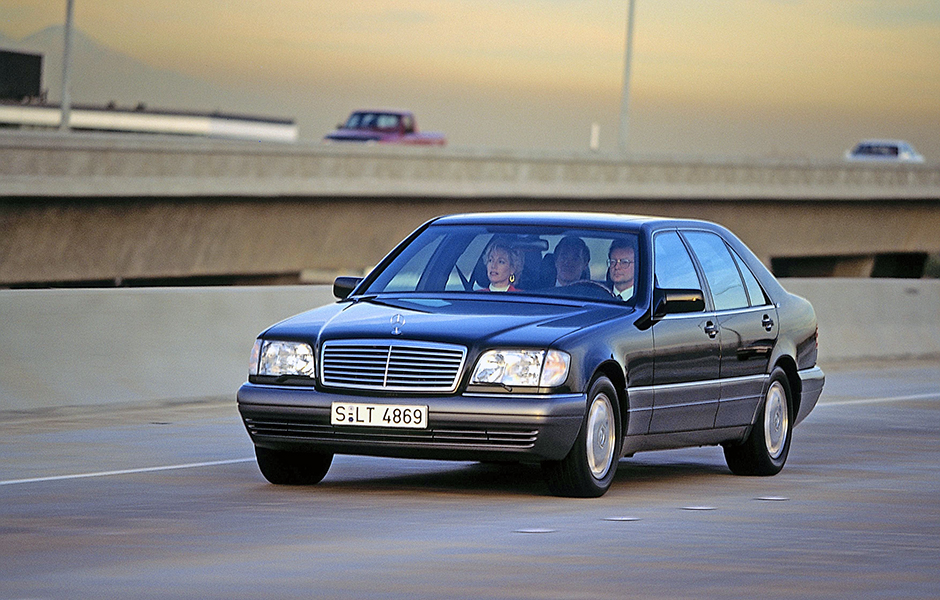 Introducing horizontal creases around the perimeter of the lower cladding and bumper covers elongated the visual impression of the design in 1994. This was a supremely comfortable touring sedan in long wheelbase form and a mainstay for diplomatic service globally.

Variations on the theme

The platform was ideal for regal transport and an S500 Landaulet was constructed for the Vatican and I was surprised to learn that a 500SEL was constructed to test ‘autonomous mobility’ in 1994. This ‘VaMP’ technology processed footage from 2 wide angle cameras via a computer and controlled steering input, throttle position and brake function. Tests were carried out by the Institute for System Dynamics and Flight Mechanics at the University of the German Armed Forces in Munich. Autonomous Mobility. Sound familiar?

While the 140 models were successful in the global markets, their complication and bulk have not endeared them to subsequent generations of MB enthusiasts. Regardless, this range of S-class models has to be respected for its innovation, no compromise comfort and and effortless touring capabilities. And the coupes were extraordinary in their own respect but that is a story for a later date. 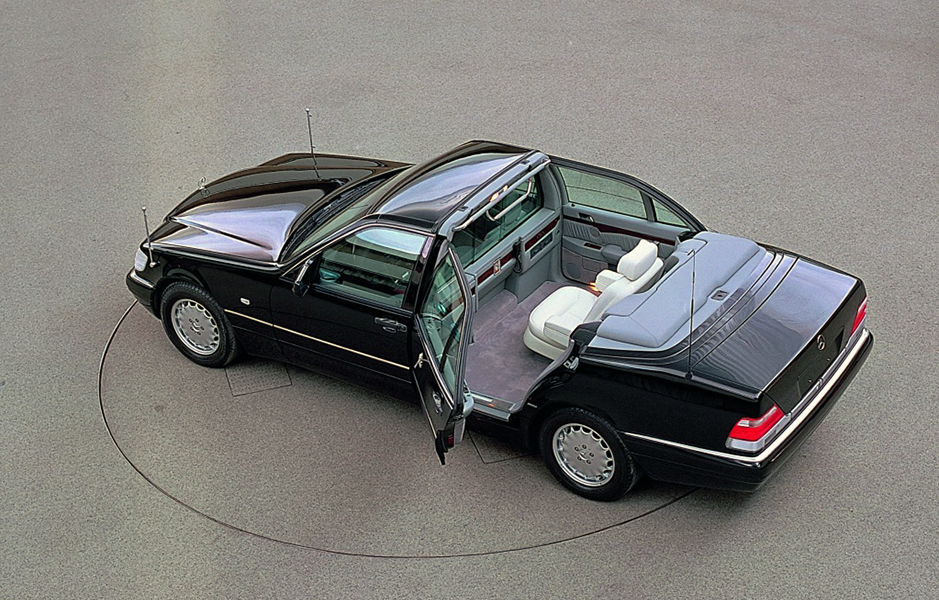 One thought on “140 Sedans: Outsized luxury”