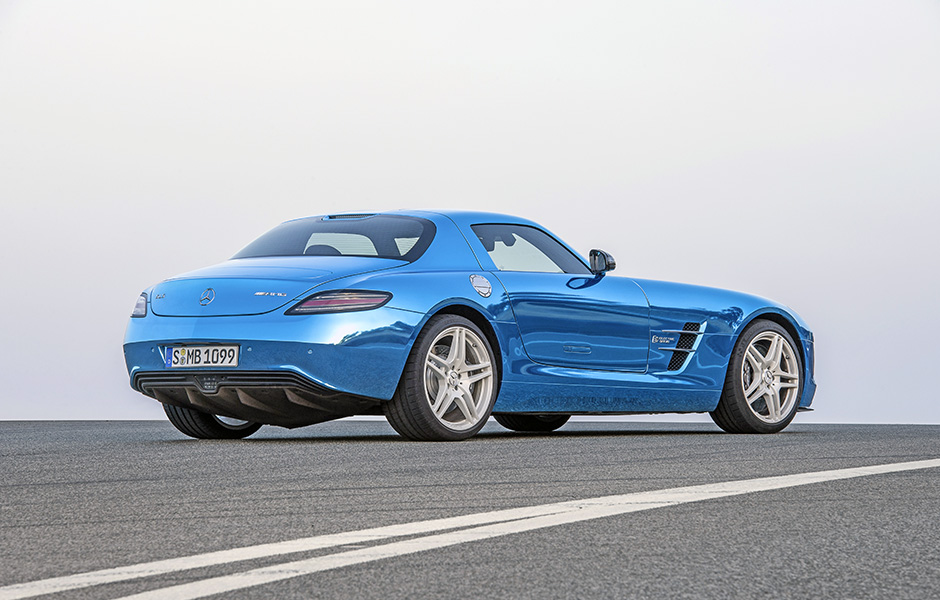 The introduction of Mercedes and AMG’s day-glow yellow SLS F-Cell Gullwing in February 2011 could well have been considered a ‘green’ media play by the skeptics among us. Indeed, the car was featured in dozens of magazines and permeated most specialist automotive web communities including ours. But with an effective range of only 100 miles while driven conservatively, could we really take this project seriously?

Mercedes-AMG have just answered that question. The shimmering, reflective blue-chrome – “AMG electricbeam magno” Gullwing you see above is one very serious all electric Super Sports Car, and one that will be available in Europe in 2013 for a few forward thinking MB enthusiasts who get organized early enough to place an order. That order will require at least 419,000 Euros ($540,000) to begin the process to ultimately place an Electric Drive SLS in your garage.

Abbreviating the extraordinary technical specification and clever packaging embodied in this other-worldly, massively competent Gullwing was damn tough. Parsing the Daimler Media release too aggressively would be an affront to the various technical groups involved in the Coupe’s conception and construction. Let’s dive in.

Ola Källenius, Chairman of the Board of Management of Mercedes-AMG GmbH commented at the launch, “With the help of our colleagues at Mercedes AMG High Performance Powertrains in Brixworth, we are bringing exciting advanced technology from the world of Formula 1 to the road”

Safely ensconced within a “zero intrusion cell” and part of the Coupe’s carbon fiber central monocoque spine, Brixworth’s handiwork – the 548kg (1,205 lb) battery pack – delivers 552 kW (740hp) of power and 1000 Nm ((738 ft/lb) of torque via four 45 lb compact permanent-magnet synchronous electric motors. With the ENTIRE 1,000 Nm of torque available from a standstill and driving through all wheels, the new SLS catapults to 100 km/hr (62 mph) in 3.9 seconds. The ‘energy content’ of the new car’s battery 60 k Wh, a significant increase over the 2011 F-Cell’s 48 k Wh.The drive system allows power to be fed to each wheel in a modulated fashion in a permanently active manner, drive technology AMG refers to as Torque Dynamics.

Additionally, each individual wheel can be electronically braked based on the driving conditions…instantaneously. The AMG Torque Dynamics can be adjusted via three transmission modes: Comfort, Sport and Sport plus. The dynamic possibilities here – the instantly available and electronically four-corner splittable 738 ft/lbs of torque combined with stabilizing braking forces also electronically four-corner splittable – should provide an unforgettable driving experience: Think Tron Light Cycle for the street…

Carbon Fiber Reinforced Plastic (CFRP) abounds in the Electric Drive’s construction providing a massively strong and lightweight structure to mitigate the dynamic impact of a 1,200 lb battery mass placed at the core of the automobile. How light is CFRP? A single strand of fine carbon fiber – ten times thinner than a human hair – stretched from my office to the moon would weigh just 25 grams. CFRP is a very cool but massively expensive composite which can be woven into mats then molded into three-dimensional shapes and finally injected with liquid synthetic resin to harden as specific structures. 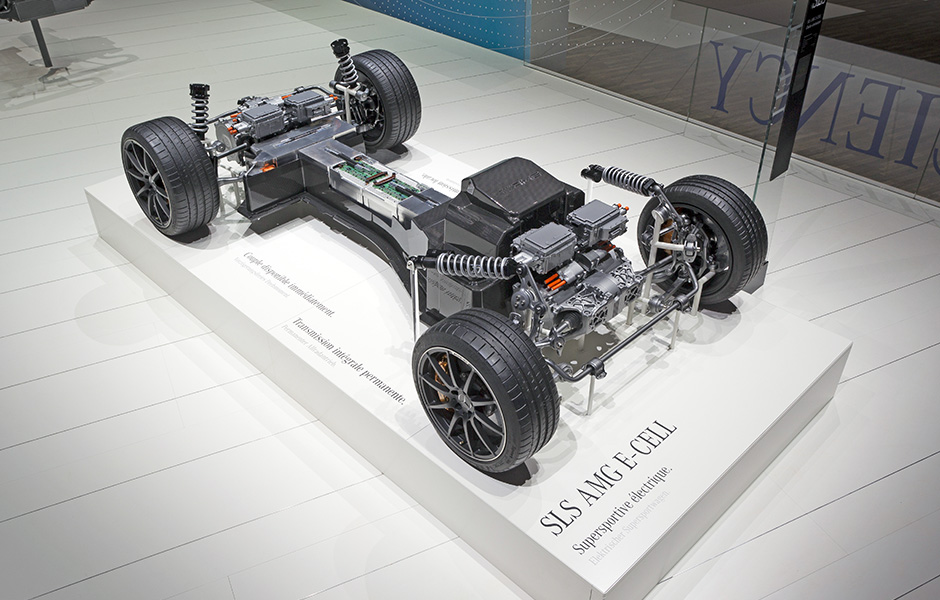 When the time comes for a charge, the Electric Drive owner has some options: queuing next to the sundry Leafs and Volts at the currently scarce public charging stations, a 20 odd hour standard residential charge at 7.2 kW of power or the optional AMG ‘wall box’ that delivers 22 kW which would deliver a full charge in approximately 3 hours. And the range? How about a 50% increase over the yellow F-Cell’s 100 miles. A range of 250km (150 miles) roughly doubles that of Nissan’s Leaf but is far short of the current EV mileage champion, Tesla’s upcoming Model S, at 265 miles.

With this amazing SLS, Mercedes-AMG have set the standard for EV Supercars and we’ll just have to wait and see whether Lamborghini, Ferrari, Audi and Porsche feel the fully electric Supercar market justifies the expenditure required to chase the the ‘electrifying’ (sorry, couldn’t resist) 2013 SLS AMG Coupe’ Electric Drive. Some additional data follows: 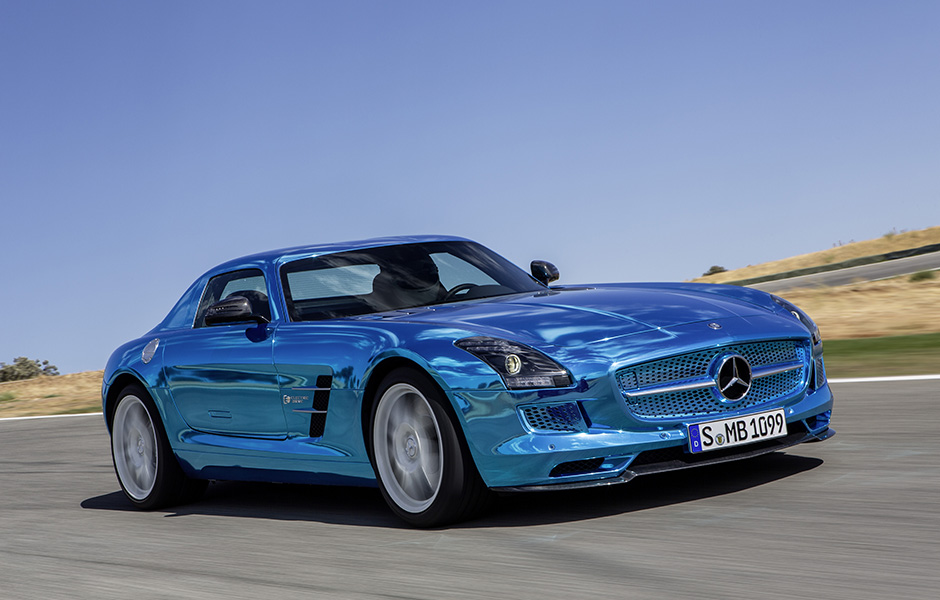 Let’s step back into the ‘so last year’ and entirely prehistoric world of petrol powered supercars and have a look at the new GT version of both the coupe and roadster versions of the SLS. Power is up from 563 hp to 591 hp and with remapped transmission software, the 7 speed gearbox performs speedier exchanges via ‘real’ steel shift paddles. 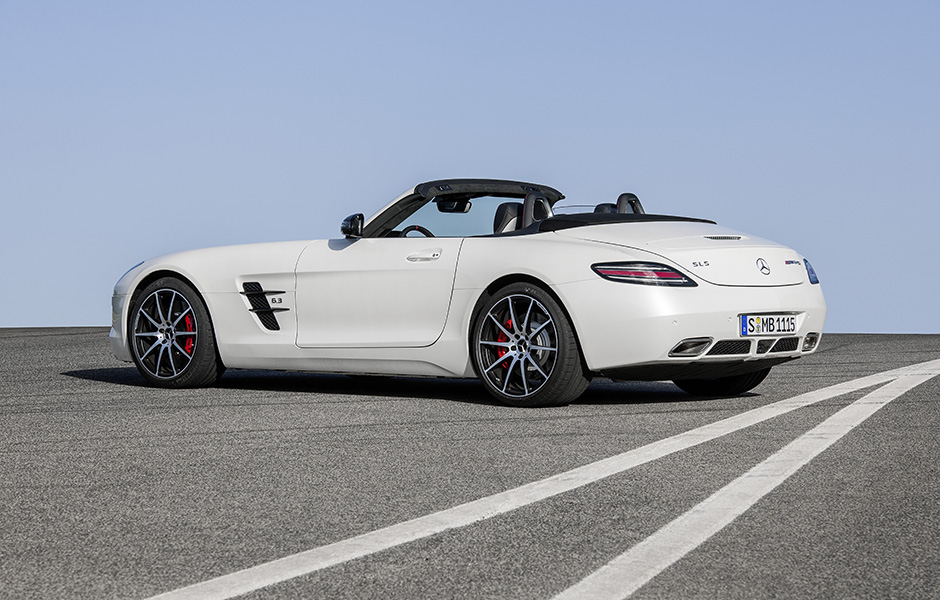 New SLS AMG GT presents a more aggressive stance and offers 591 hp and revised suspension/transmission programming for extra grip and balance. The GT package is offered in both coupe and roadster configuration.

The GT’s interior receives some tasteful additions by way of Alcantara seat inserts and center door panels as well as red stitching on the sport seats, door panels and center console. Mercedes and AMG are justifiably very proud of the epic SLS range and the new GTs are the most interesting iterations to date. Daimler Media sums up the 197 series’ global popularity quite nicely below.

“The SLS AMG has succeeded in winning numerous comparison tests against a host of international competitors conducted by the international specialist media – both as the gullwing model and the Roadster. Since its world premiere at the IAA International Motor Show in Frankfurt in 2009 and the presentation of the SLS AMG Roadster in May 2011, the super sports car from Mercedes-AMG has picked up a total of 40 awards – including such major prizes as the “German Design Award”, the “Red Dot Design Award”, the “Golden Steering Wheel 2009”, “Classic of the Future”, “Sports Car of the Year”, “Best Performance Car” and “Legends on Wheels”.” 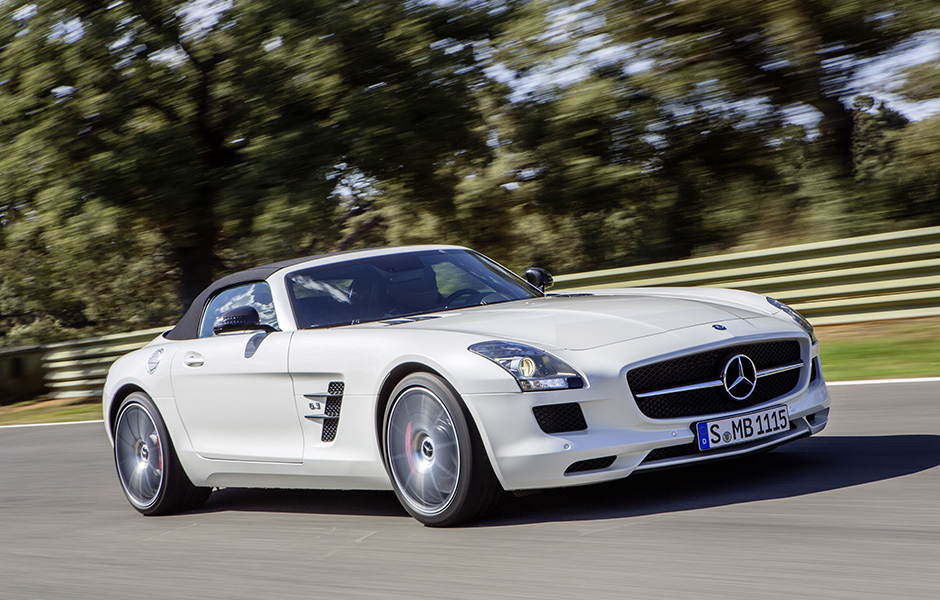 Storming along the world’s greatest roads (and tracks) is the new GT’s forte. The new car brings the number of SLS models to six.