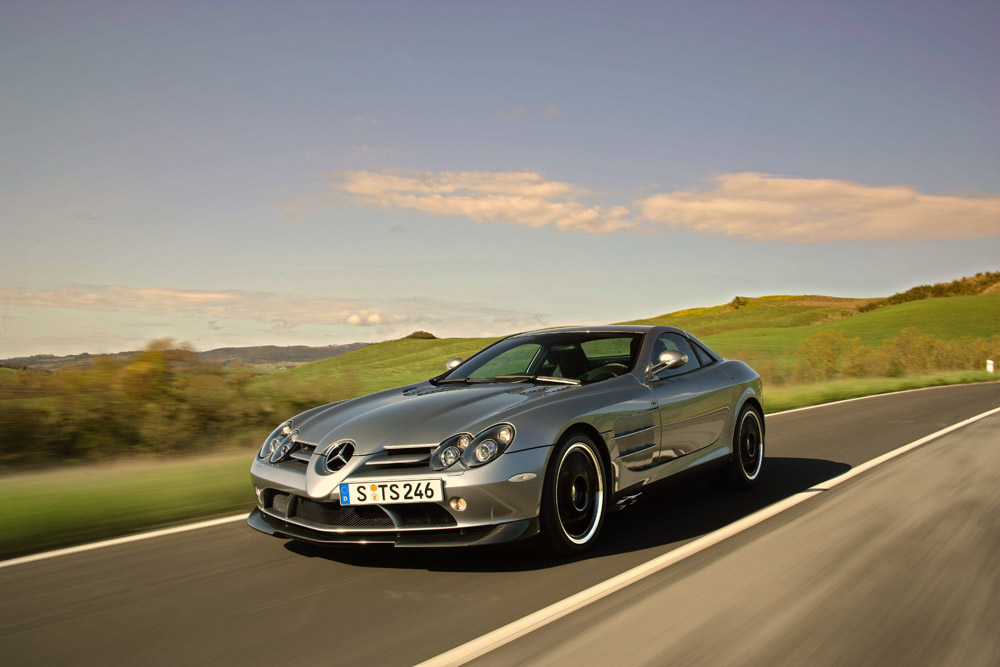 Let’s forget about the newspaper headlines for a moment and have a look at the current state of supercar production at Mercedes-Benz. There’s no harm in escaping to automotive fantasyland for a few minutes.

SLR: The latest missive from the factory confirms the end of SLR production on December 31, 2009. Nationally, dealers are welcoming the end of the initially highly anticipated but ultimately disappointing SLR production. While money was made during the initial 2005/2006 sales, many dealers accepted massive losses to dispose of unsold SLRs as the production run unfolded and demand simply evaporated for this surprisingly usable 200 mph road car. Flooring costs associated with carrying a few $450k SLRs on the books for a few years – yes, some dealers have had SLRs languishing in inventory for well over a year – are staggering and have soured the car’s reputation amongst dealer principals. If you have been after a new SLR, whether a coupe or roadster, today is an excellent time to buy one of the many cars still in dealer inventory. Low mileage used examples can be had for massive discounts against their initial sales prices.

Current depressed pre-owned SLR prices may not last forever and may follow the precedent set by the original Gullwing. Introduced in 1954, Gullwing prices sagged to a low of around $4k in the early sixties, only to race upward for the next four decades reaching today’s dizzying heights. With production numbers similar to the Gullwing’s, the SLR may yet have its day as an appreciating supercar. It seems the 722 street cars are the only SLRs showing some resale strength.

The final SLR, the Stirling Moss Edition, is an uncompromising track day car conceived by Mercedes, McLaren and the exclusive SLR.CLUB members. Production commences in June and only 75 units will be constructed and offered at EU750,000 ($1,012,500) for non-US consumption only. Looking over the color/trim options, I’d opt for a Pure Orange(000U) with Black(L21) leather for my car. While I’d love to hurl this new SLR around the Brands Hatch circuit in England, the concept strikes me as too over-the-top and massively out of step with today’s attitudes. I predict steep depreciation for this car due to is limited practicality and towering initial price. 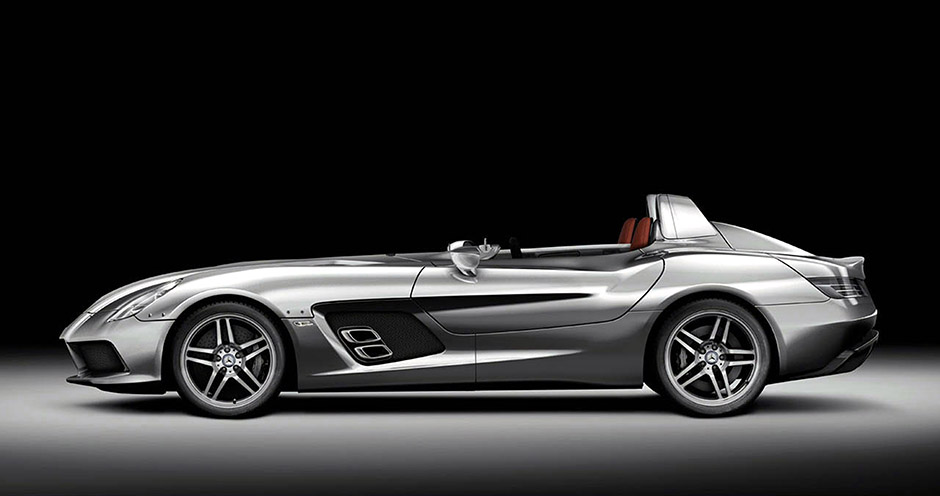 Non-US, minimalist “Stirling Moss Edition” the final iteration of the SLR – pricey at over $1m.

The brutal, bulgy 2009 SL65 Black Editions are starting to arrive at local dealers. The current financial climate has pushed many early interested buyers to request their deposits be returned, thus a number of the 200 destined for the US are arriving at dealers unsold. Our local dealer reported ALL Black Edition deposits were returned and their car arrived last month unsold. However, it only sat for a few days before a Korean gentleman phoned about Black Edition availability. Within a few hours he was enjoying the Black Edition’s 661hp under his right foot. These cars will also become excellent values after a few years depreciation. 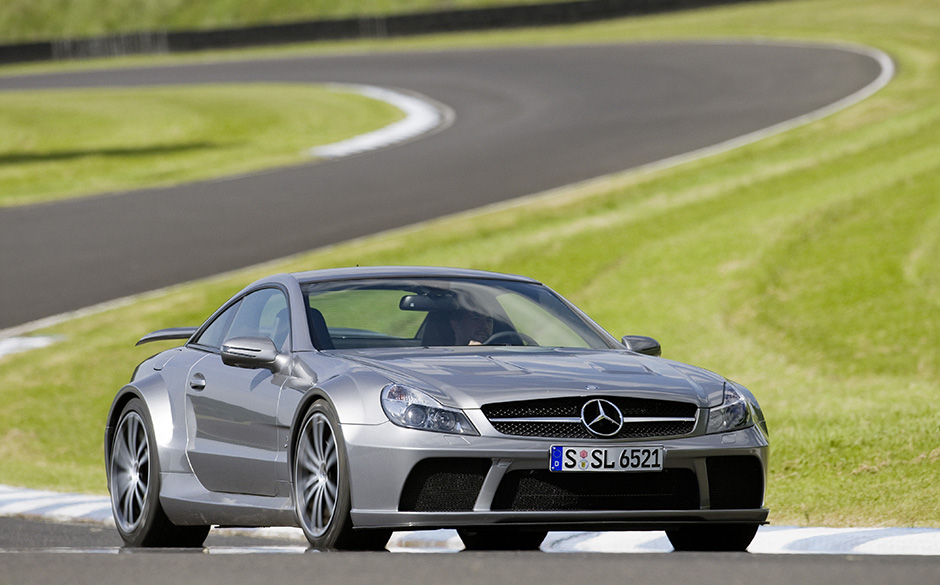 Hot rod “Black Edition” SL65s beginning to arrive in US. Only 200 will be constructed.

The less than successful SLR program has split the Mercedes/McLaren partnership and both will go it alone on their respective upcoming supercars. With spy photos of the Viperesque SLS/Gullwing test hacks having been circulating the internet for over a year, we’ve known something was in the works at Mercedes-Benz to replace the SLR. My latest Mercedes media communication was surprising in that it was the first occasion I could recall the factory releasing images of a test hack. While Mercedes only wants us to see the test hack, the new Gullwing – the factory press release confirms this name – is a reality.

The press release carried images of engine, drivetrain and cutaway renderings of the aluminum unit body – everything except an image of a finished car. With 571 hp, closed torque tube driveline, dry sump lubrication and the use of a transaxle, the new Gullwing should be a spectacular performer. And with a rumored price of roughly 60% of the SLR, I predict a winner, particularly if the final product emerges similar the rendering below. Much of the production of this new Gullwing may very well be sold before they hit US showrooms.

That brings us up-to-date on the ultra high performance offerings from Mercedes. My next article on the Gullwing will provide all the technical information and undoubtedly include images of the unmasked new Gullwing. We can’t wait. Meanwhile have a look at the technical images below. This new Gullwing looks to be a world beater. 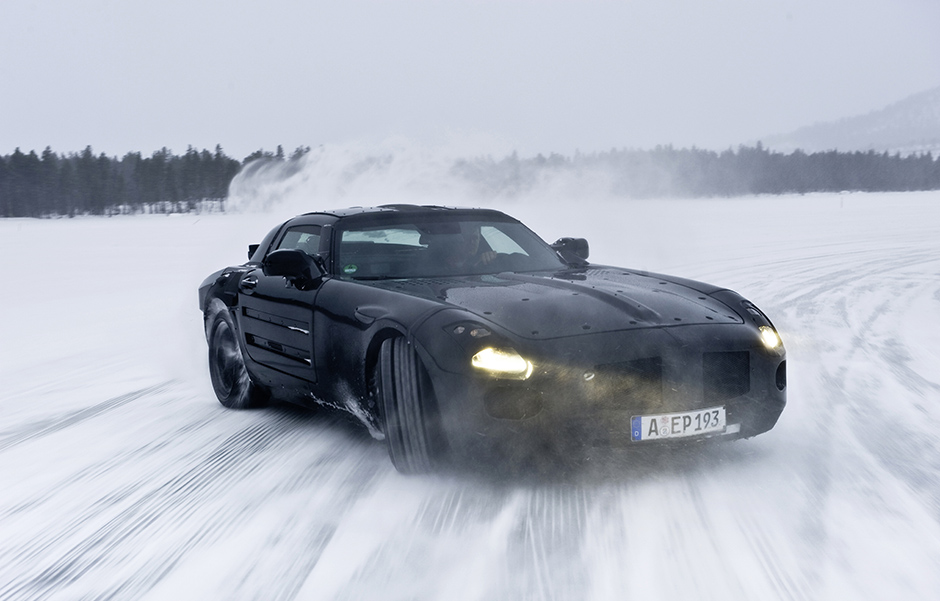 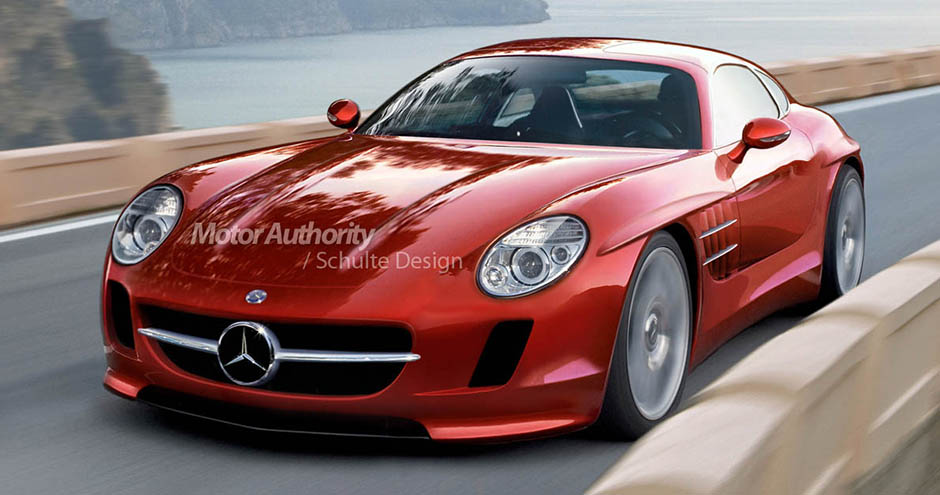 Schulte Design rendering might be close to final Gullwing shape – looks spectacular to me.

571hp AMG 6.3 V-8 connects to transaxle via solid torque tube. I see a fairly low “polar moment” layout which should result in a very agile Gullwing.