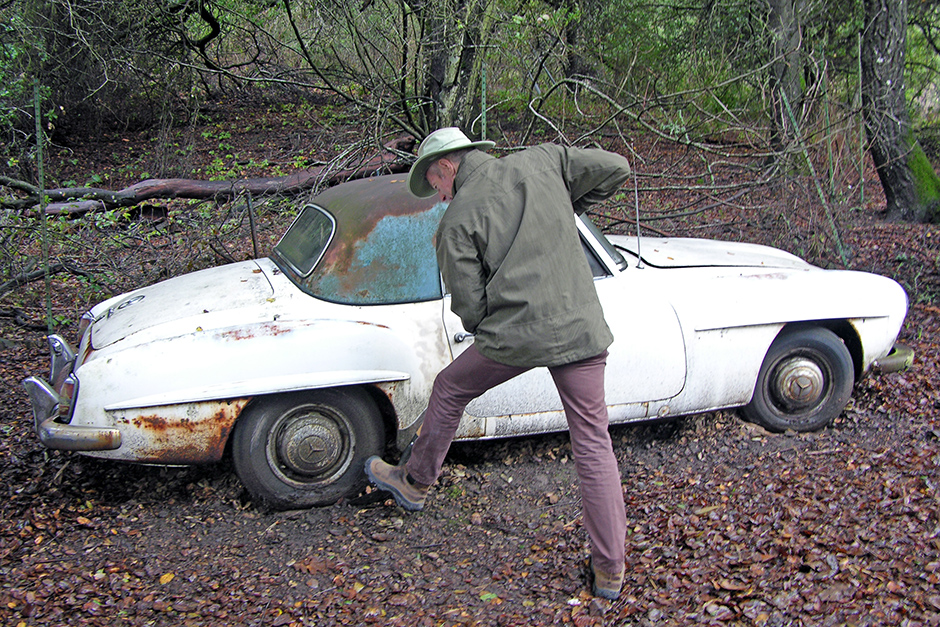 Among the usual phone calls I received late last year was an intriguing request to buy two MB classics that had been languishing in the foothills above Yountville in CA’s wine country.

While the discussion initially had some of the typical cues of a fraudulent request for deposit money, I followed up on the project. A little probing and the receipt of title copies etc. confirmed that this was indeed a real opportunity but one which would have to be concluded a few months after sending a deposit.

” We cleared the SL’s engine bay of debris but when we returned two days later the critters had begun rebuilding their quarters!” 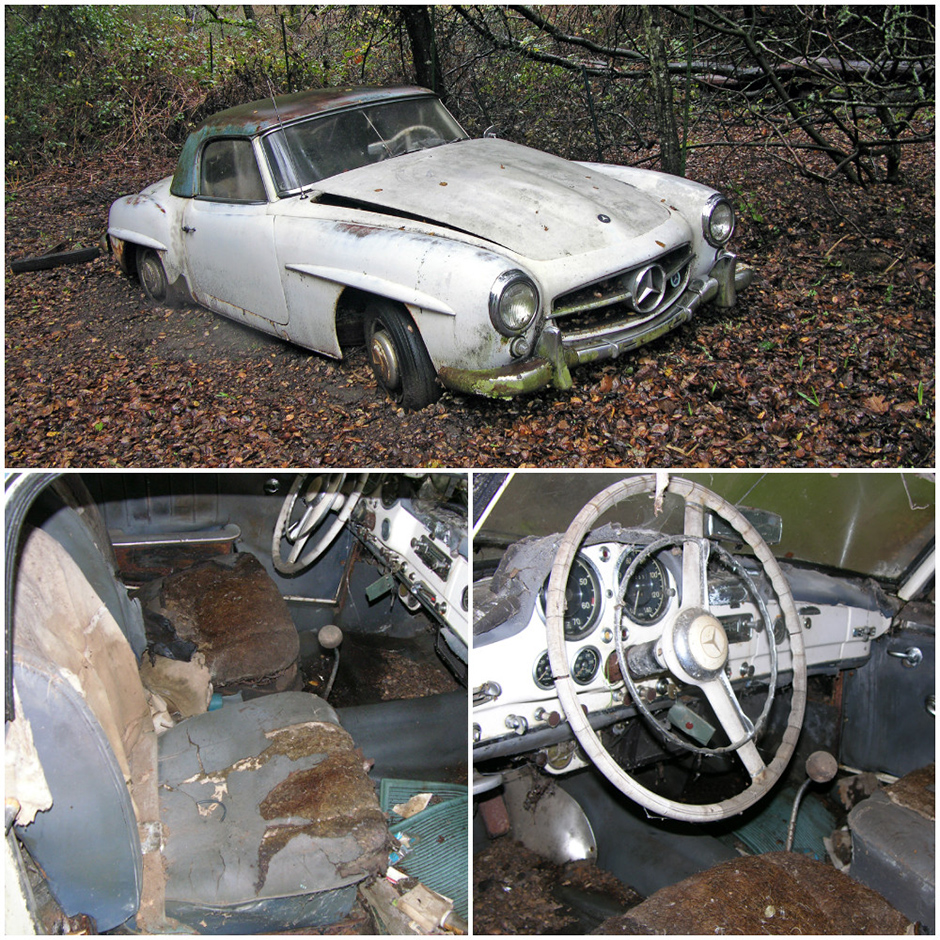 Despite the brutally weathered interior and cosmetics, this two-top 190SL retained all its original coachwork. Doors clicked shut perfectly and hood/deck lid fit was perfect. It was a fabulous if motley find.

After a reconnaissance trip to figure out how to remove the cars we made plans that included a tow truck, a flatbed, 4 people, an air source, rakes and shovels. We timed the weather perfectly as removal day arrived after a torrential downpour the day before and a promised downpour the next day. And of course, all wheels were frozen and slippery mud abounded on the route up to a main road. No problem.

The SL was rooted in the soil and required half an hour or so of digging to free it for the pull. And it was the home to a large community of critters who began to rebuild their debris condo on the engine during the two days since we initially cleared it away!

The 220 sedan was buried deeper than the SL. A very early car and fully intact, it required a massive digging effort and eventually the earth yielded it to the tow truck and it wobbled up the hill on the most heavily destroyed tires imaginable. They miraculously held air to the top of the hill. 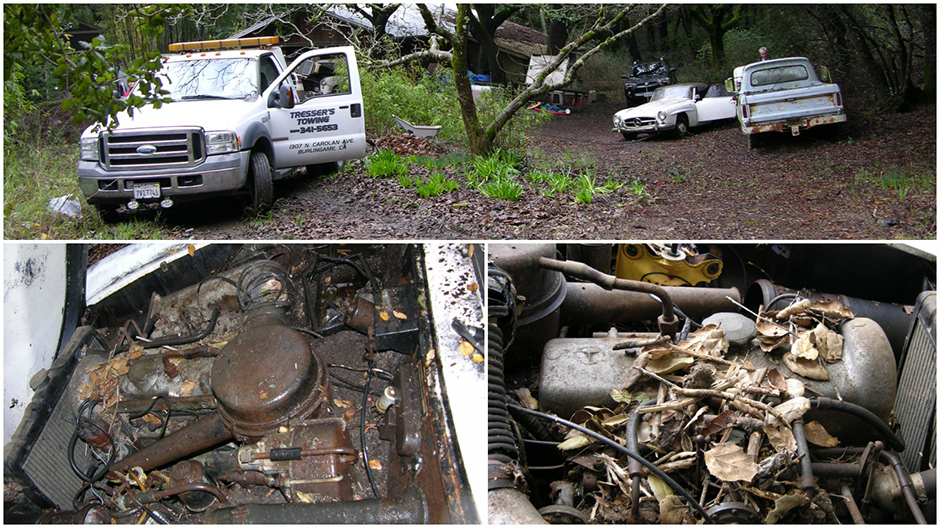 We cleared the SL’s engine bay of debris but when we returned two days later the critters had begun rebuilding their quarters! Because of the muddy conditions, the tow truck could not approach the SL. It was dragged through the mud out to stable ground before being ferried 1000 feet up to the main road, an adventure that required a few hours after both truck and SL slipped sideways half way up and began to slide back down the hill! One of the front tires had separated from the rim so a tire change restored enough grip and stability allowing a full throttle blast to the paved main street. 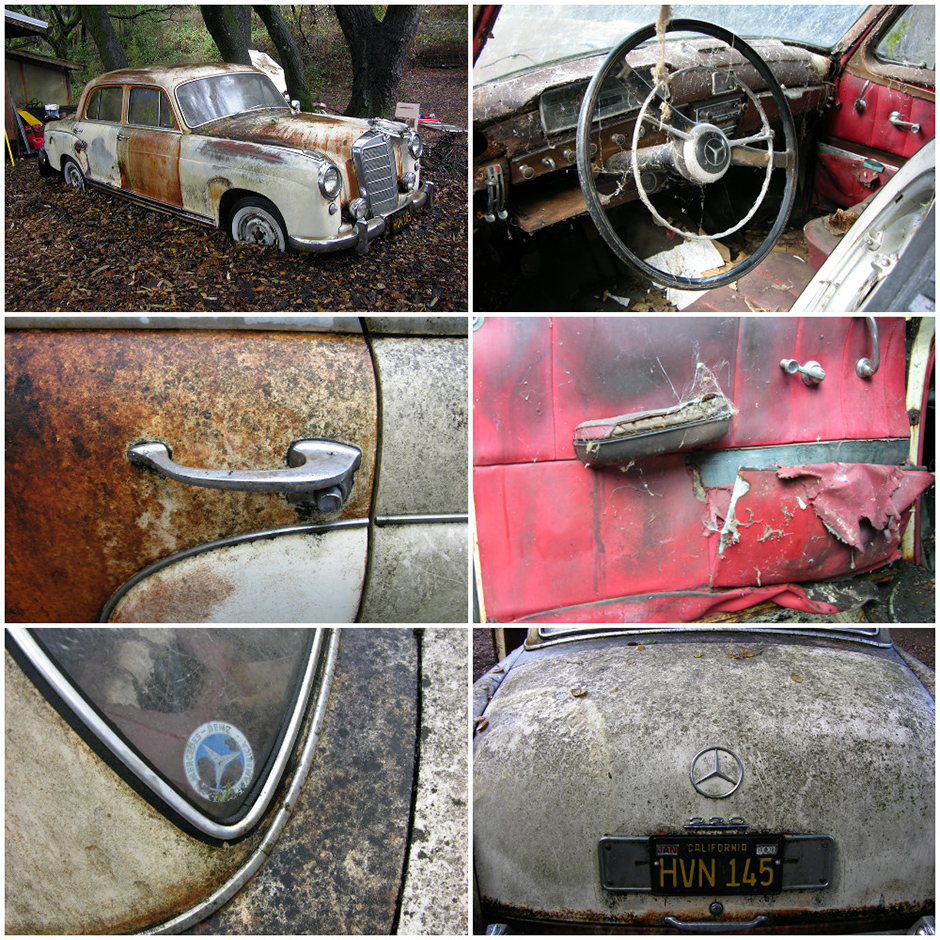 The 1955 220 had become essentially one with the earth and required some serious digging to remove. It’s fate is likely that of a parts car as restoring it would be financial suicide.

The 190SL will go to a restorer in Europe and will emerge in a few years as a perfect 2-top show car. The 220 sedan’s fate will more than likely be that of a parts car and it is on its way to Germany. So, two classic MBs saved from the ravages of mother nature. 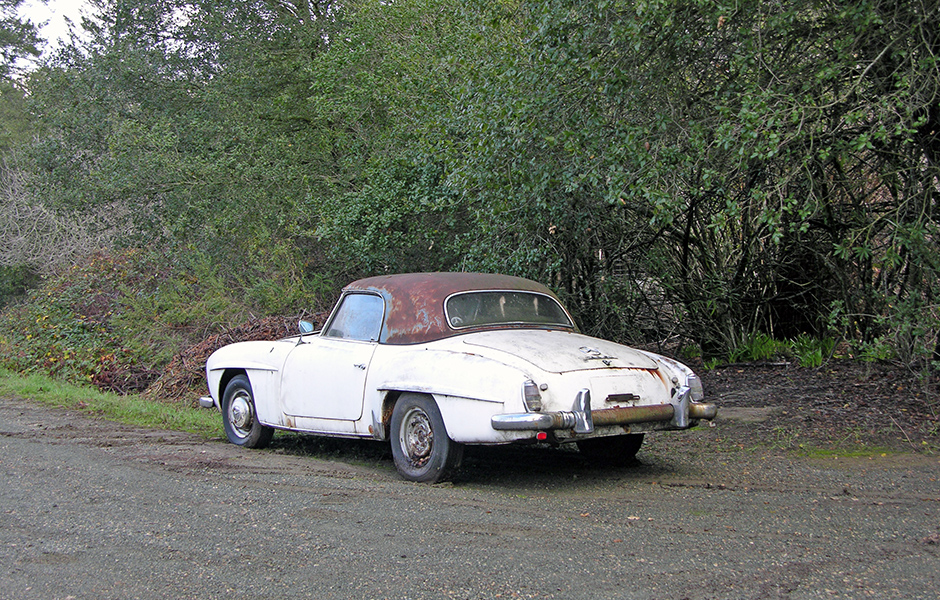