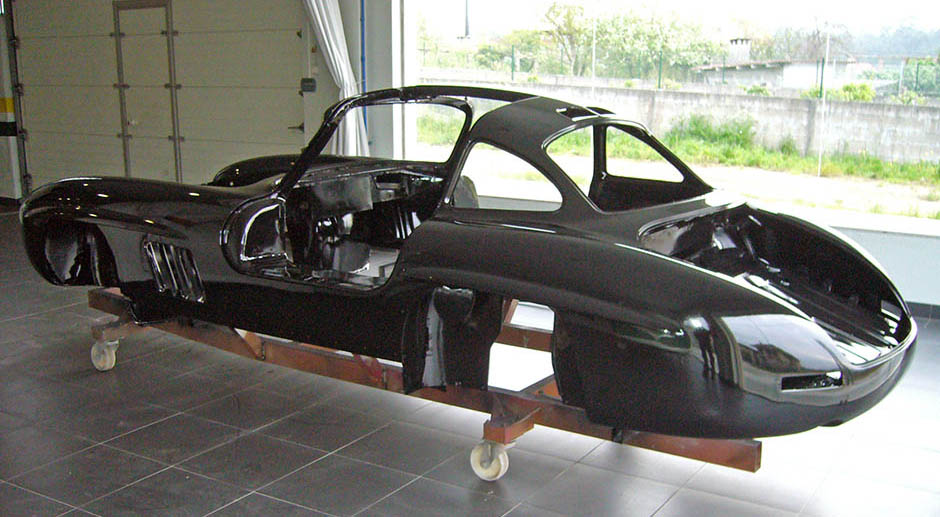 A most unusual Gullwing
Interior re-trim leads to full restoration

Our friends at Juan Lumbreras in Pontevedra, Spain have sent along a report on a gorgeous fully restored Gullwing with a number of rather unusual modifications. Chief engineer Nuno Rocha and his staff received the car from a client who was simply interested in having the interior redone after recently purchasing the car. While the seller represented the silver Gullwing as a cosmetically excellent and technically up-to-date example, careful inspection by Rocha’s men revealed a very different story.

Poor prior paint and coachwork repairs combined with generally weak mechanicals – the new owner intends to use the car aggressively on  – dictated what became a full body off restoration – every nut and bolt.With aggressive touring in mind on Europe’s great vintage tour events and the car now destined to come completely apart, the owner decided to upgrade his Gullwing with improvements that would create a most extraordinary road car. There is no doubt the Gullwing had world beating speed, handling and braking capabilities when introduced in 1954. The journalists of the day could barely conceal their amazement that such a car could be constructed for street use.

William Boddy, editor of Motor Sport Magazine for over 40 years commented after his extensive road test of an early example: “It is truly difficult to convey on paper the fascination, amounting almost to awe, that this car imposes on those who drive it or are driven in it.” In today’s world, however, fast paced touring in a Gullwing can be a hot, and slightly unnerving experience with fading brakes, massive heat soak – particularly with the belly pans in place – from the engine and drivetrain, and an antiquated gearbox. Engineer Rocha’s plan for this Gullwing would address all these issues and more.

To assist the Gullwing’s 50+ year old brake technology, disc brakes were fitted up front and a 5-speed Getrag gearbox installed to give the car more touring flexibility. As the car was re-assembled all the interior floor panels were carefully covered with heat resistant material to reduce heat absorption. Further mechanical improvements included fog lamps, a performance air filter, electronic ignition and, reminiscent of the 300SLS roadster, side exhaust routed to exit the left rocker just aft of the front wheel arch.

Comfort refinements included converting the original radio to stereo and installing an iPod port as well as a CD changer. Perforated seat leather (as used on 300SL roadsters) was installed with four point shoulder harnesses and, for accurate Rally stage timing, a removable trip meter was fitted as well – all very clever additions. The original ivory steering wheel was replaced with a thick rimmed four-spoke replica of what you would see in Mercedes-Benz’ competition cars of the ’50. And of course, a fresh set of fitted luggage was tucked below the back window. 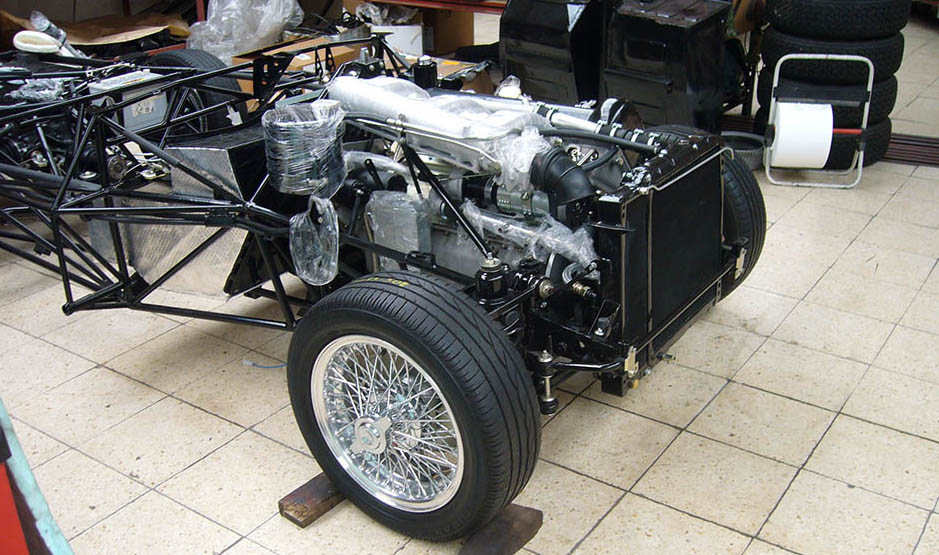 Work in progress. Brilliant Borrani wire wheels fitted over disc brakes are just a few of the modifications to this Spanish Gullwing.

Cosmetic changes included bumper removal and filling of bumper bracket holes and the addition of a very clever faired license plate housing to the tail ala the 1955 300SLR.The tired silver Gullwing was being transformed and the final – and potentially controversial – change was the fitment of 16″ Borrani wire wheels. This is a very rare alteration to a Gullwing. As Borrani had never created a set of their glorious wheels in this size, a special set were (expensively) created.

The car’s wheel arches had to be subtly enlarged to accommodate the new wheel/tire combination. While I’m as committed to originality on these cars as most Gullwing enthusiasts, I feel the result here is outstanding, particularly with the dark color scheme – just breathtaking. This is a Gullwing like no other and proof that while Mercedes-Benz got it absolutely right in 1954, there is room for improvement on the theme 55 years down the road.