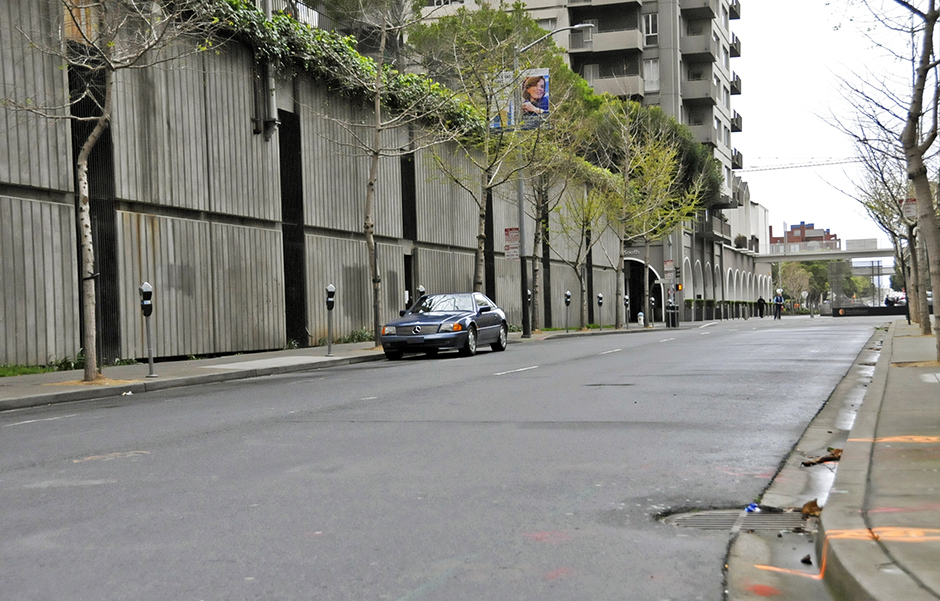 I’ll readily confess to being itching to get out and around during these serious and personally confining times. With my Italian specification ’92 300SL requiring a final road test, I thought socially isolating behind the wheel of this rare 5-speed would go far to clear my head. Power Yoga at home was helping but a cruise to SF in this cool R129 sounded like a good idea.

With extremely thin traffic and a surprising amount poor high-speed driving behavior surrounding me, I made my way to SF to check out the MB street scene. Predictably, I found an assortment of unique MBs parked among the masses of nondescript iron. I can report that the quality of the streets in SF is still appalling.

The highlight of the trip, aside from discovering the 300SL’s manic windshield wiper operation, was Clarion Alley in the Mission, a one block single lane easement covered with brilliantly colored and often politically relevant murals. It’s worth another trip to walk it and fully absorb the art and the words. 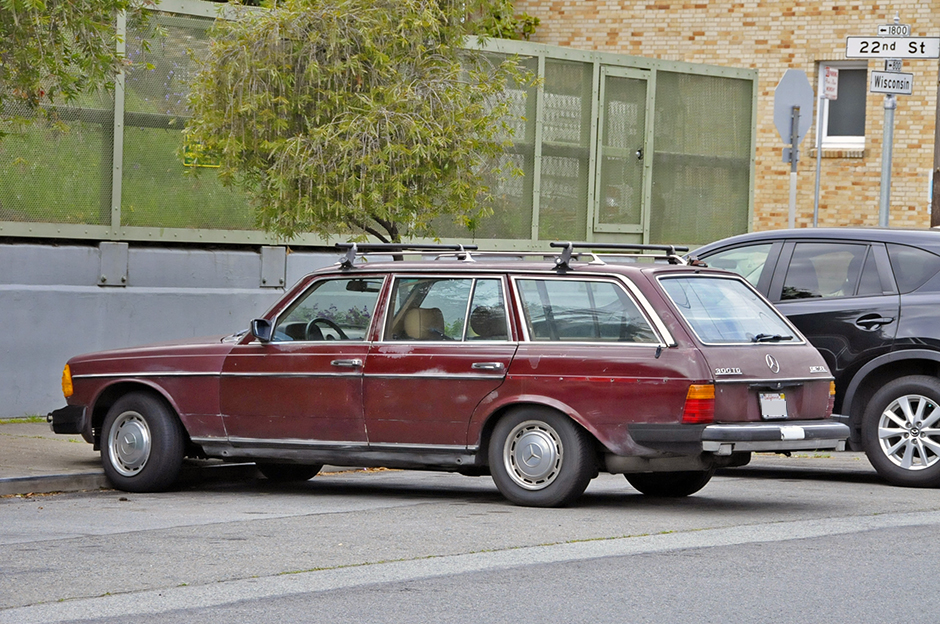 123s endure and I see them daily in the SF Bay Area. This, um, patinated, early non-turbo 300TD in 501 orient red/104 bamboo MB tex is still delivering (most of) what MB promised when new: “to work hard – but to work quietly and smoothly and satisfyingly.” By the looks of the home-made racks above the optional factory roof rack, this looks like maybe a windsurfing workhorse. 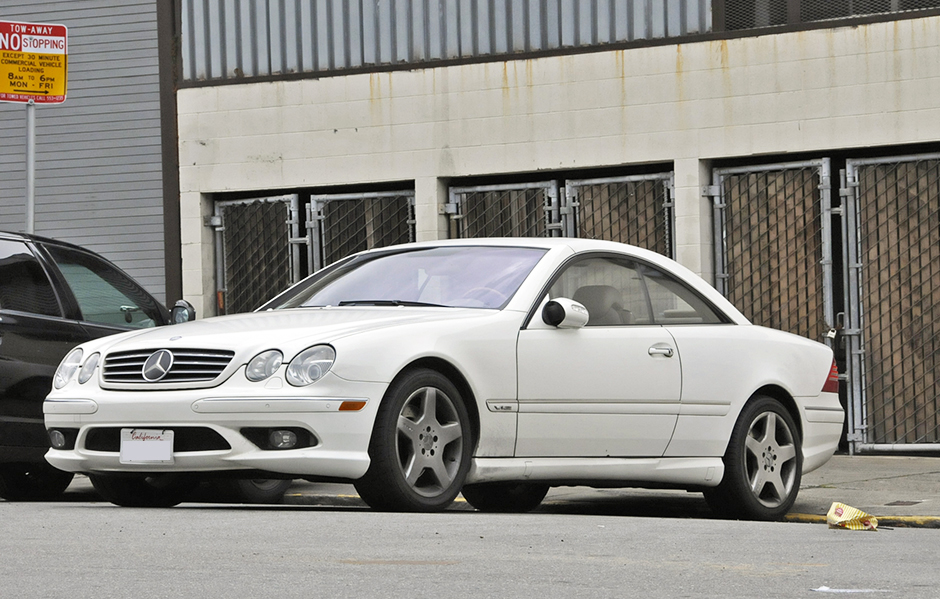 This looks like a 2005 CL600 in arctic white which had an original MSRP of about $129k. Staggering money. And a very rare car in the day with US production numbers for 2005 quite likely in the hundreds. If all the bits underneath the car are happy, this is a satisfying and muscular cruiser. 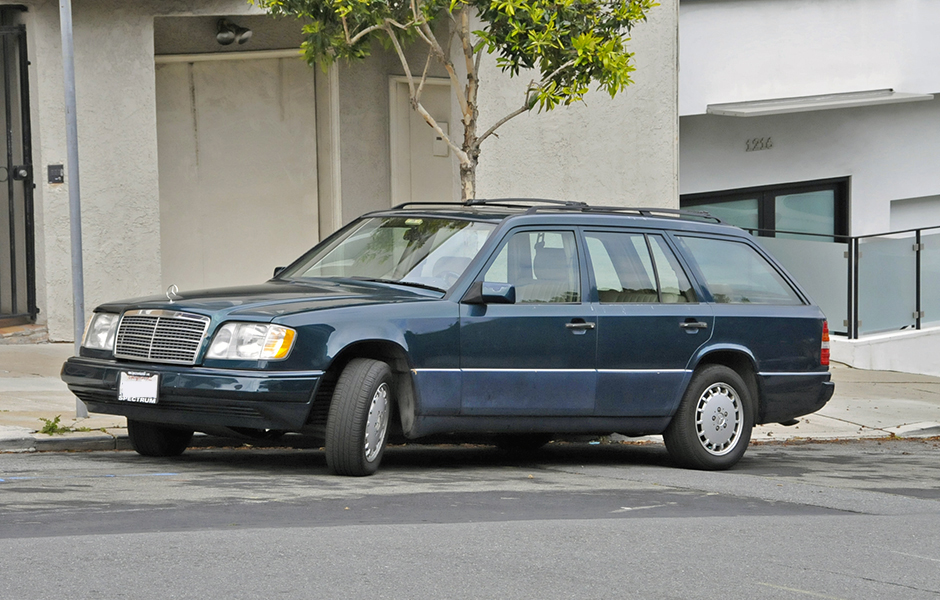 Based on the color, 269 brilliant emerald and the full side cladding, my eagle eye notes this to be an E320 wagon but fitted with earlier 300TE wheels. It has certainly lost some of its brilliance but is still on the road. 124 wagons and sedans are still regular sights in the SF Bay Area. 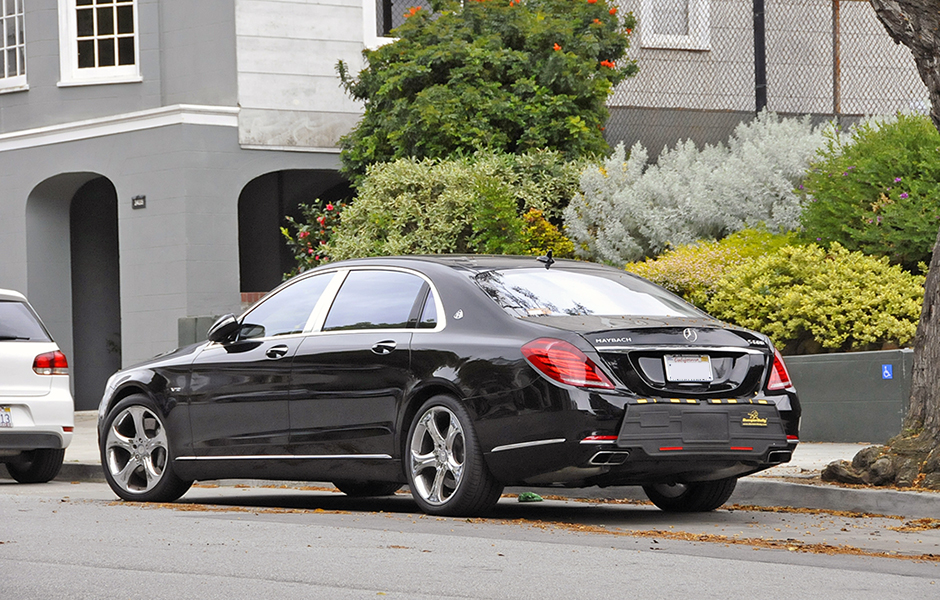 While not an oldtimer any Maybach sighting is rare today. This looks like a 2016/2017 S600 V12 which would have sold new for about $191k. They seem to trade today for about half that. This would be quite an extravagant daily driver and risky to park despite having a rubber curtain draped over its tail. And such pedestrian wheels for this level of motorcar. 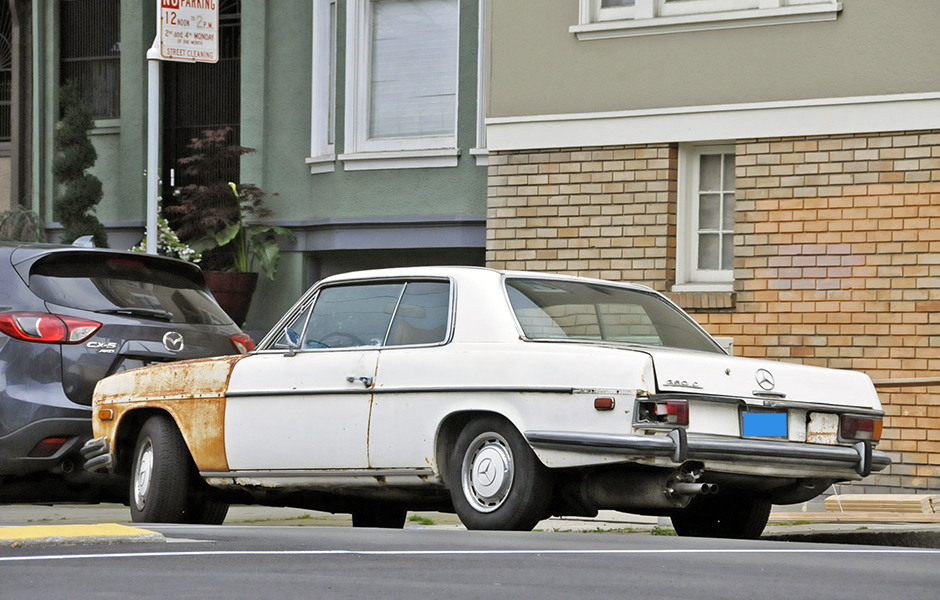 No, this 250C was not abandoned but is currently registered and still hobbling along. Would loved to have met the owner to see what his/her world is like. This seriously motley 114 coupe is a California from new blue/yellow plate car. What a story it could tell… 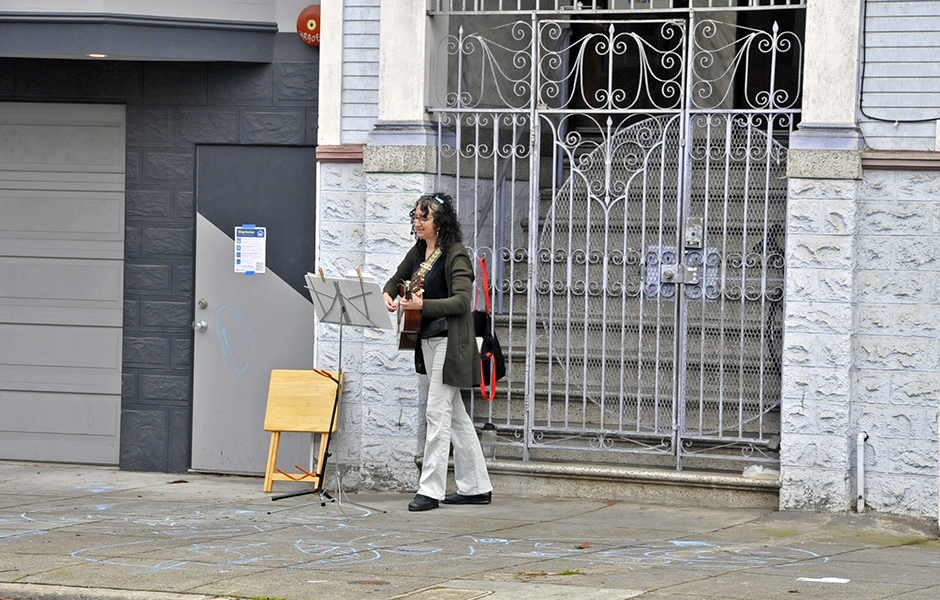 Relieving the monotony of today’s reality with the gift of music in San Francisco. Maybe she owned the china blue 280E just up the street. 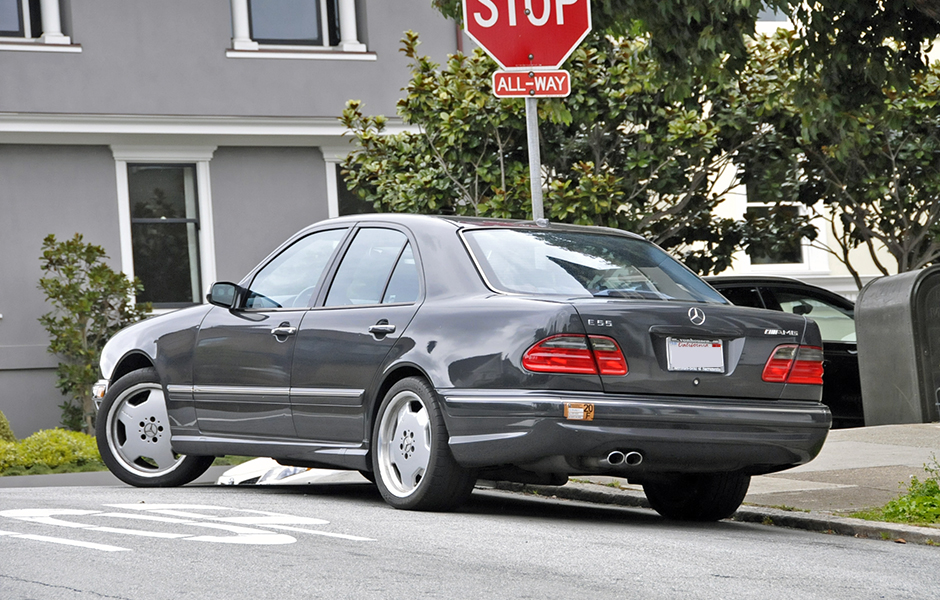 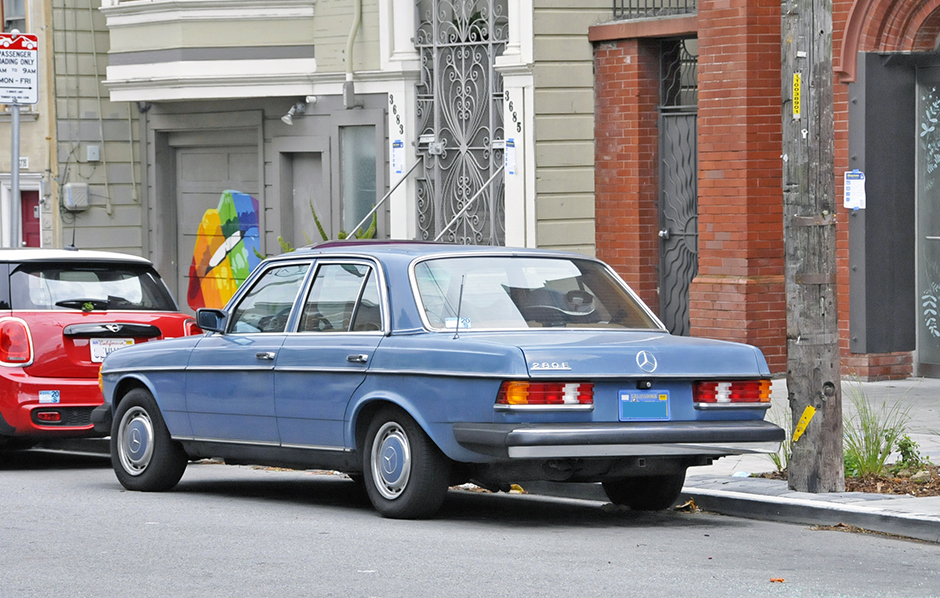 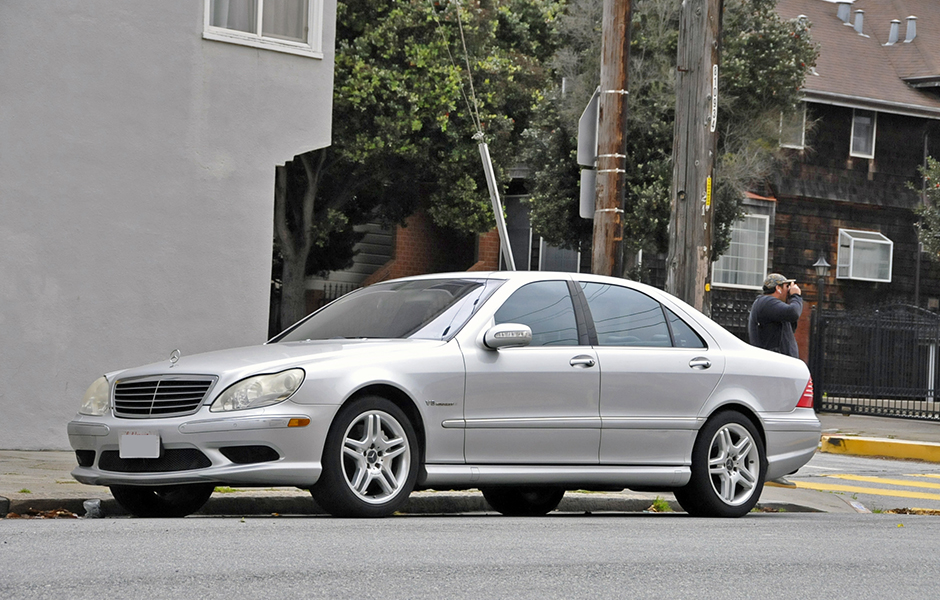 This S55 was let down only by its yellowed headlamp faces, such a common eyesore on the early 00’s MB models. It shares the same spec 349 HP drive train as the E55 above and certainly was over $100k when new. Decent examples can be had for 10% of that today. 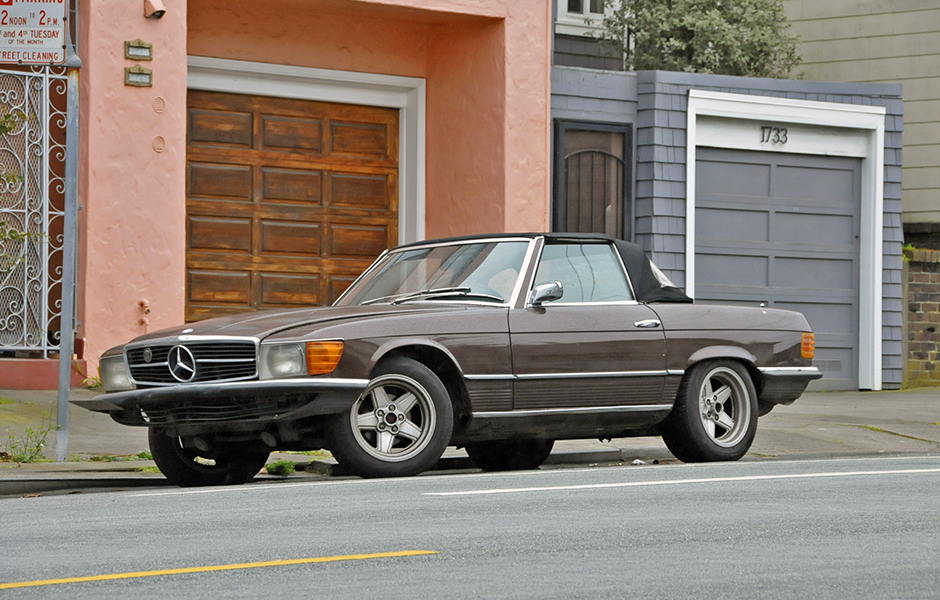 This 107 seems to be a European model based on the absence of bumper guards, euro headlamps etc. Who knows how it was born. I didn’t catch the insignia on the tail. The original appearing AMG Penta alloys are worth 25% of the car. Regardless of its neglect the purity of the original 107 design is still evident.